Jimmy Lin has regained consciousness, but there are multiple rumours about his accident on July 22, 2022.

However, in the three days while the 47-year-old was in Linkou Chang Gung Memorial Hospital, some rumours have surfaced. An eyewitness claimed that Jimmy's seatbelt was not fastened when he was pulled out from the vehicle.

Jimmy's wife, Taiwanese actress Kelly Chen, said in a post on Weibo on Sunday: "I hope to quell the false news spreading on the Internet, which makes me, a wife and mother, very sad to read. I would like to appeal to the public not to believe in unverified rumours.

"I would like to thank everyone for their concern and support for us — this is the greatest way to help us right now."

The 38-year-old did not elaborate what the rumours and false news were.

In the accident last Friday, Jimmy and one of his six-year-old twin sons Jenson sustained injuries when their Tesla collided with a signpost on a road partition, catching fire soon after.

Passers-by managed to pull the duo to safety and Jimmy was placed on the side of the road to await medical assistance.

Jimmy was reported to have multiple fractures including on his face, a dislocated arm and was also bleeding, while his son suffered bruises to his neck and a chest contusion. There are worries that Jimmy's facial fractures might affect his good looks.

Read Also
Jimmy Lin and son, 6, pulled out of Tesla when it crashes and bursts into flames 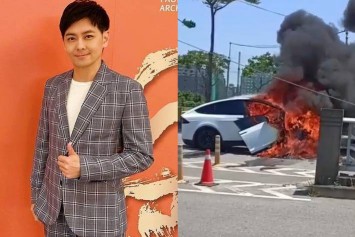 Unflattering pictures were also taken of him and posted online. In the photos, his shirt was pulled up to his chest exposing his torso, and his face was also swollen and bloody, prompting legal advice from lawyers.

"Jimmy's face is his commodity," a lawyer said. "By posting such negative images of him online, not only would this infringe his portrait rights, it would also affect his commercial value."

However, Taiwanese media reported that Jimmy's family will not be suing anyone. The family views these passers-by as "benefactors" and expressed that the family would not be offended by them.

Additionally, Taiwanese media reported that the Taoyuan City will request from Jimmy a payment of around NT$100,000 (S$4,600) for the damages caused to the signpost.

Jimmy's manager told reporters today that Jimmy is now able to hold simple conversations with his loved ones. To protect his privacy, his family are not revealing the operations he's done.

Jimmy's brother added: "His still isn't well enough to explain the incident fully. I hope the public will stop speculating on this matter. This is the last time we reveal Jimmy's condition to the public."