At her concert last Saturday (Jan 30), she and Lin performed a song he wrote, Practice Love, after which he surprised her with a tiered cake and balloons.

He then led the audience in a rousing rendition of Happy Birthday for Chua, whose birthday was two days before the concert.

"Thank you, Tanya, for inviting me," said Lin, adding half-jokingly: "I haven't been on a stage for ages."

Both Singaporeans are based in Taiwan and have had their live performances and events curtailed due to the Covid-19 pandemic.

Chua's highly anticipated Kisses For The World concert was originally scheduled for May last year and was her fifth outing at the Taipei Arena.

She said that she had not really celebrated her birthday because she was busy on that day preparing for the concert, her first since 2016.

"In my heart, I thought, is this how I am turning 46?" she added. "But today has made up for everything. Thank you, everyone."

As there has been a resurgence of Covid-19 cases in Taiwan, there were discussions of further postponing the sold-out concert.

In the end, the organisers decided to go ahead, but with stringent measures in place.

The vast concert space was thoroughly disinfected and mask-wearing and temperature-taking were required of all concert-goers. 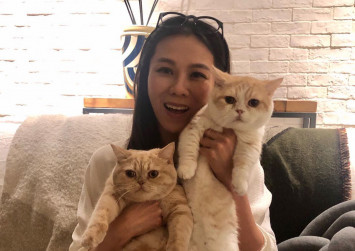 Identity checks for contact tracing were also done, which held up the start of the concert.

About 1,500 of the 10,000 ticket holders decided to get a refund on their tickets instead. To fill the empty seats, the organisers put up heart-shaped balloons.

Still, even with only 85 per cent of the arena filled, ticket sales crossed NTD21 million (S$1 million) and Chua sent out a message to those who were unable to attend: "Music will bind our hearts together."

As for her birthday wish, she said: "I wish for the universe to quickly end this epidemic."