Books from the Harry Potter series by author J.K. Rowling.

J.K. Rowling's revelation that two Harry Potter characters were in a gay relationship has sparked an angry backlash, with some fans accusing her of changing her books to keep up with social trends. In 2007 Rowling outed Albus Dumbledore, the head of Hogwarts school in the best-selling books, saying he had fallen in love with Gellert Grindelwald - a fellow wizard.

More than a decade on, she said there had been a "sexual dimension" to their relationship, leading to accusations on social media that she was trying to "score brownie points" with the LGBT+ community.

"You had your chance to make Dumbledore/Grindelwald gay when you, you know, wrote the books/made the movies," tweeted @ZoeyReport - one of many fans who criticised the move. 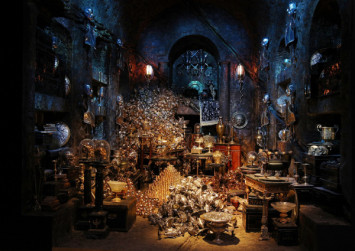 Marvel Comics came under fire for making the lead character of its latest movie Captain Marvel a woman - even though he was male in the comic series the film is based on.

Rowling has previously been accused of retroactively trying to insert diversity into a series dominated by white heterosexual characters, such as when a black actor was cast as Hermione in the play Harry Potter and The Cursed Child.

However a number of fans thanked the billionaire author for her latest effort to introduce diversity into the Harry Potter world.

"I choose to focus on progress, and I think your characters help us grow and think," tweeted @dr_michael_b.