Actor Johnny Depp arrives for the screening of the movie "Minamata" during the 70th Berlinale International Film Festival in Berlin, Germany, February 21, 2020.

Johnny Depp and Amber Heard reached a divorce settlement in August 2016 before the final paperwork was signed off in January 2017.

In newly uncovered text messages that were sent by the 57-year-old actor after the settlement was agreed, he said he "f****** hates" his ex-wife and "wouldn't touch" her with a "hazmat suit on".

The text messages were made public this week when they were shown to the Court of Appeal in the UK after Depp appealed against losing his defamation case against The Sun newspaper, who had branded him a "wife-beater" following allegations made by Amber after their split.

Johnny's lawyer Andrew Caldecott argued Amber may have "deceived" the judge in the defamation case into thinking "she was a likely victim of domestic violence".

In response, The Sun's lawyer Adam Wolanski uncovered text messages which they argue prove Depp was "preoccupied" with the idea that his ex was a "scumbag gold-digger".

"Makes me sick to think of how hard I tried to make it work. Now…

Another message also saw Depp insist Amber wouldn't give "one penny" of her $7 million divorce settlement to charity after she pledged to do so.

He wrote: "She won't donate ONE PENNY! No way she'll give a dime to anyone!"

After showing the texts to the Court of Appeal, Wolanski then claimed it was "fanciful" and "absurd" to suggest that Heard's charity donations influenced the judge's findings in the defamation case, and branded Depp's comments as a "misogynistic trope".

He told the court: "The labelling of Ms Heard as a 'gold-digger' was a misogynistic trope. It was hopeless, just like [Johnny's] theory that these accounts of abuse are a 'hoax'.

"It's nonsensical, and goes to no issue in the case."

However, Johhny's lawyer claimed the judge in the original case "failed to examine the evidence and the arguments with the care that the parties were entitled to expect", despite the trial taking four weeks, with the judge taking a further three months to prepare his judgement. 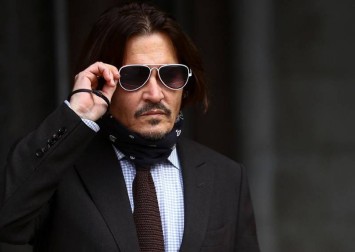 As of the time of writing, Amber has donated $350,000 to the American Civil Liberties Union (ACLU) and $100,000 to the Children's Hospital of Los Angeles, and representatives for the actress have insisted she still intends on fulfilling her pledge to donate the full amount.

Her attorney Elaine Bredehoft said: "Amber has already been responsible for seven figures in donations to charitable causes and intends to continue to contribute and eventually fulfil her pledge.

"However, Amber has been delayed in that goal because Mr Depp filed a lawsuit against her, and consequently, she has been forced to spend millions of dollars defending Mr Depp's false accusations against her."

The Court of Appeal will announce its decision on whether to give Johnny leave to appeal at a later date.