It was a tumultuous time for former child actor Joshua Ang when he was embroiled in a very public and ugly dispute with ex-wife Shannon Low last December.

However, it seems that things are looking up as Joshua, 32, recently announced that he is expecting a second child. He made the announcement by publishing the sonogram of a baby on his Instagram with the caption "See you soon, love".

The one thing that he hasn't revealed though, is the identity of the baby's mother.

His reticence is understandable, considering the spotlight on his personal affairs since the messy divorce.

For the uninitiated, Joshua and Low married in 2018 and had their son, Jed, in the same year.

Then, on the night of Dec 14 last year, Joshua announced his divorce from Low on Instagram. He had also posted a photo with the words "Happy divorce" but it was later removed.

In response, Low went on her Instagram Stories to unleash a slew of allegations against Joshua, accusing him of being an "abusive, violent and irresponsible father" who was lying and victimising himself to the media.

She said she was only spilling the beans because Joshua wanted to "start spilling your juicy news". 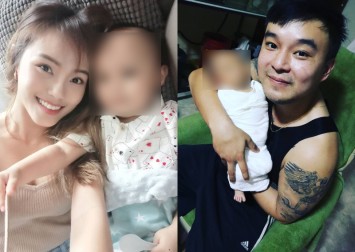 Low also attempted to obtain a Personal Protection Order (PPO) against him but failed due to a lack of evidence of his violent behaviour.

As for Joshua, he told AsiaOne back then that this was a "personal vendetta between her and myself". He denied her claims and shared that he had taken legal action against her.

He declined to elaborate on the details of events that happened between them as he didn't want their son to see negative things about his mother in the public sphere.

At that time, Joshua also claimed that he was gradually denied access to Jed after the couple agreed to take some time apart, adding that he was fighting for an Access Order to see his kid once a week.

It seems that he was successful as Joshua's Instagram page is full of happy pictures of him and Jed.

ALSO READ: 'I think this is a personal vendetta': Joshua Ang on estranged wife's public allegations

As for the baby mother, Joshua hasn't said a peep about her; but it's safe to say that it's probably Joshua's new girlfriend.

He had previously posted about her on Instagram and even shared couple photos (with her face censored by a sticker) but removed the photos since the fight with Low.