Kim Jung-hyun's (left) former lover, Seo Yea-ji, has been named as the person behind his unprofessional behaviour.

K-drama actor Kim Jung-hyun, 31, has been embroiled in one relationship scandal after another.

Last week, it was rumoured that he has been dating his Crash Landing On You (2019) co-star Seo Ji-hye, 36, for a year, although both their management agencies have denied it.

Now, a former lover of his, Seo Yea-ji, 31, has been named as the person behind his unprofessional behaviour on the set of 2018 drama Time, which he eventually left.

According to text messages allegedly between Yea-ji and Jung-hyun obtained by South Korean entertainment portal Dispatch, she had ordered that he have no physical contact with his female co-star, singer-actress Seohyun, 29.

Yea-ji, who met Jung-hyun on the set of 2018 movie Stay With Me, had commanded him to remove all "skinship" scenes — the term refers to intimate, non-sexual touching — as well as to act stern to female staff on set. He also had to send her videos from the set for her to monitor his actions.

According to an analysis by Dispatch, which compared the script to the actual episodes, numerous scenes in which Jung-hyun and Seohyun would have touched were changed.

Even in a wedding scene, they walked down the aisle without holding hands.

It also quoted people who were on the set, who said Jung-hyun had frequently asked for script changes and would hinder Seohyun from getting into character, causing her to break down during filming. 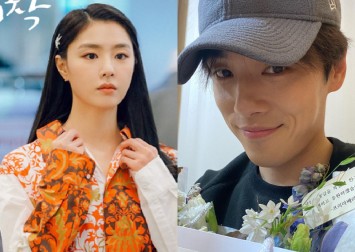 One anonymous source said: "He constantly requested to adjust the script on set. If his requests weren't met, he then ran out and dry heaved."

Jung-hyun was said to have used an eating disorder as a reason for the script changes and eventually left the drama, going on a hiatus until Crash Landing On You (CLOY), in which he played a rich man hiding out in North Korea.

He is also in a dispute currently with his management agency over the end date of his contract and it has yet to release a statement.

On Monday (April 12), Yea-ji deleted all the contents of her Instagram account. She was also conspicuously absent on Tuesday from a press conference for her upcoming movie, Recalled, which opens on April 21.

The star of It's Okay To Not Be Okay (2020) has just been nominated for Best Actress for her role in the hit Netflix series at the 57th Baeksang Arts Awards, which will be given out on May 13.