The agency said on Wednesday (Nov 14) that it has ended its contract with Pentagon member E'Dawn.

This follows the departure of his girlfriend and former labelmate HyunA who left the agency a month ago.

"Cube Entertainment and E'Dawn agreed to cancel our exclusive contract together on Nov 14. We sincerely thank the artists and fans who've been with us until now," the company said in a statement.

Since news leaked in August that he and HyunA are dating, the 24-year-old had been suspended from his group's promotional activities.

Following the announcement of his departure, E'Dawn is seen smiling in a series of posts on Instagram.

K-pop star HyunA has parted ways with Cube Entertainment, the agency confirmed in a statement on Monday (Oct 15).

"We sincerely thank the artist who has been with us until now and fans once again," Cube wrote.

The 26-year-old singer's departure from the label comes after her announcement in August that she has been dating her labelmate E'Dawn from boyband Pentagon for the past two years. 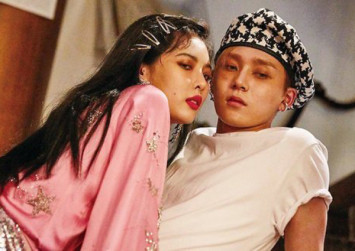 The agency had previously said it was kicking the K-pop couple out on Sept 13 before backtracking on its decision the very next day.

News of the couple being dropped from the agency then elicited a huge backlash and caused the company's stock price to fall 6.57 per cent.

In the lead-up to news of her confirmed departure, HyunA appeared to be in good spirits in the street snaps that were posted on her Instagram account.

On Oct 10, she also shared photos of herself out on a date with E'Dawn, 24, in Japan. The post received close to 2.1 million 'likes' with encouraging messages from her fans.

Pentagon's fans, however, got angry at the timing of her post, which happened to fall on the day of the K-pop boyband's second anniversary, AllKpop reported. They said that it was "not cool" of the couple to be lovey-dovey when the fates of E'Dawn and Pentagon remain precarious after the dating scandal.

E'Dawn is from 10-member K-pop boyband Pentagon which made its debut in 2016.