NEW YORK - It is a Christmas present that Kim Kardashian is unlikely to go back to the store to exchange it for something else.

Not when the gift, from husband Kanye West, 41, is a US$14 million (S$19 million) apartment in Faena House, one of Miami Beach's most exclusive condominiums, reported gossip portal TMZ.

The 4,700 sq ft property reportedly houses four bedrooms, 5½ baths and a wraparound terrace that looks out to the sea.

West earlier this year played Santa to his wife, 38, too, giving her a US$1 million cheque and part-ownership of his Yeezy footwear and apparel business, for a Mother's Day reward.

But he is unlikely to be generous and extend an invite to Drake, 32, to visit the Miami Beach home.

West, who has been involved in an online spat with the Canadian rapper, posted recently: "I never knew till this morning that Drake followed my wife on Instagram back in September."

West had claimed in earlier posts that Drake was a menace.

"So Drake if anything happens to me or anyone from my family, you are the first suspect - so cut the tough talk," West warned. 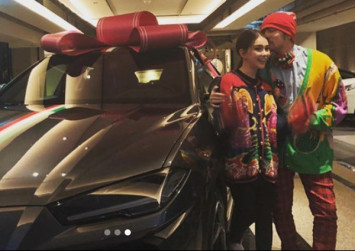 Meanwhile, another celebrity has also ended the year with a fabulous gift. Taiwanese superstar singer Jay Chou got an expensive car from his wife, actress-model Hannah Quinlivan, 25.

But he had to take a roundabout route to get into the driver's seat.

She first despatched him on a scavenger hunt which began with a clue in a small shoebox and that ended with him finding a brand-new Lamborghini Urus in his garage.

The car, touted as the world's fastest sports utility vehicle, can reach a top speed of 305kmh and 100kmh in just 3.6 seconds.

The car is also an early gift for car collector Chou who turns 40 next month.

In Singapore, the Urus retails for $799,000, without a certificate of entitlement.