Kanye West is being sued for failing to return rented clothing.

The 45-year-old rapper-and-designer has been accused of failing to return 13 "rare esteemed pieces" to David Casavant after he loaned 49 garments from the fashion archivist in March 2020.

The David Cassavant Archive claimed Kanye had returned the other 36 garments with no issue, but by the end of October 2020, he stopped paying the weekly fees on the remaining 13 pieces.

According to documents obtained by TMZ, the 31-year-old stylist is seeking US$221,000 (S$309,311) in unpaid rental fees and an additional US$195,000 to replace the missing items from the Stronger hitmaker.

Among the 49 items listed in David's invoice to Kanye - who he has worked since 2014 - was a distressed vintage blue denim jacket by Helmut Lang, a US$5,000 Gucci bomber jacket, and a Dolce and Gabbana black mesh tank top.

The Jesus Walks hitmaker has been keeping a low profile in recent months but two weeks ago, he attended the 2022 BET Awards to present Sean 'Diddy' Combs' with the Lifetime Achievement Award.

He began his speech: "How do we crown our kings?

"How do we appreciate our kings? To think how far we could just make it off of inspiration, to hear the way somebody chopped a sample..." 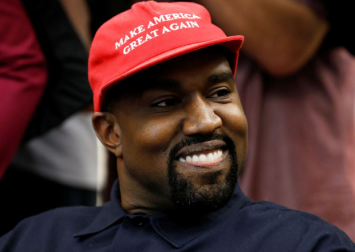 Kanye - who legally changed his name to Ye - continued: "This is my favourite artist.

The 45-year-old rap legend - who has North, nine, Saint, six, Chicago, four, and Psalm, three, with ex-wife Kim Kardashian - then quipped that the I'll Be Missing You hitmaker, also known as Puff Daddy, is the reason why he chose to marry Kim in 2014.