Model Kate Moss, a former girlfriend of actor Johnny Depp, is sworn in to testify via video link during Depp's defamation trial against his ex-wife Amber Heard, at the Fairfax County Circuit Courthouse in Fairfax, Virginia, US, on May 25, 2022.

Kate Moss denied rumours that her ex Johnny Depp once pushed her down the stairs.

The 48-year-old model - who dated the Pirates of the Caribbean star between 1994 and 1997 - appeared in court via video link from Gloucestershire, southwest England, on Wednesday (May 25) to give evidence in Johnny and his ex-wife Amber Heard's $100 million (S$137 million) defamation trial.

Amber, 36, previously referenced the model during the ongoing court case, when she discussed an alleged altercation between Johnny and her sister Whitney Henriquez, saying: "[Whitney's] back was to the staircase, and Johnny swings at her. I don't hesitate, I don't wait - I just, in my head, instantly think of Kate Moss and stairs."

When asked in court by Benjamin Chew, a member of Depp's legal team, if the 58-year-old Hollywood actor had ever pushed her down the stairs while they were dating, Kate replied: "No, he never pushed me, kicked me or pushed me down any stairs."

She told the court how during a holiday in Jamaica with Depp, he had picked her up and "got [her] medical attention" after she had fallen down some stairs.

Kate explained: "We were leaving the room and Johnny left the room before I did. There had been a rainstorm and as I left the room I slid down the stairs.

"I hurt my back. And I screamed because I didn't know what had happened to me and I was in pain.

"He came running back to help me, carried me to my room and got me medical attention."

Kate, who gave evidence in less than five minutes, was not cross-examined by Heard's team. Heard first made the allegation during her testimony in the UK in 2020. 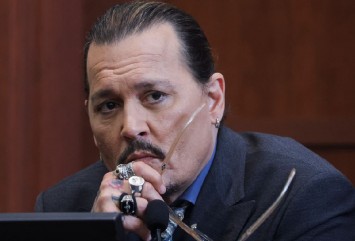 She said at the time: "I remembered information I had heard [that] he pushed a former girlfriend - I believe it was Kate Moss - down the stairs. I had heard this rumour from two people and it was fresh in my mind."

But Depp's legal team were seen pumping their fists when she first mentioned Moss' name during the ongoing defamation case in Fairfax, Virginia.

The reference gave them the opportunity to call the model as an impeachment witness to disprove the allegation. Kate previously admitted it took her years to overcome the heartache ofher split from Depp.

She said: "There's nobody that's ever really been able to take care of me. Johnny did for a bit. I believed what he said. Like, if I said, 'What do I do?', he'd tell me. And that's what I missed when I left. I really lost that gauge of somebody I could trust."

The explosive court case has been taking place over the last few weeks after Johnny sued his ex-wife Heard for $50 million over a 2018 op-ed in which she recalled being a victim of domestic abuse.

But the Aquaman star countersued for $100 million because she didn't mention him by name.