Kim Kardashian West and her husband Kanye West have decided to use a different surrogate to carry their fourth child than the woman who carried their third kid, Chicago.

The couple - who are said to be expecting their fourth kid - have asked a different woman to carry their child for them, after they welcomed daughter Chicago via a surrogate 12 months ago.

A source told Entertainment Tonight: "The couple has always wanted a big family, especially Kim. She loved growing up with all [her sisters] and Rob. Having big holidays, birthdays and events is what Kim knows and she wanted the same for her own kids. Kim and Kanye weighed their options heavily, took time to think everything through. Ultimately they decided to see, if they implanted the embryo, if it would take and left the rest up to fate. Family to Kim and Kanye is everything, and they are ecstatic they are expanding their family."

Kim and Kanye - who also have North, five, and Saint, three, together - were keen to have another child via a surrogate after having such a "positive" experience the first time but they were also open to other methods if necessary. 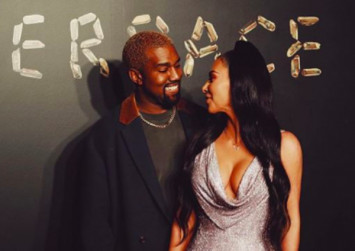 An insider said previously: "Kim and Kanye had a positive surrogacy experience with Chicago and have talked about that as the plan for the next child.

"If that unfortunately doesn't pan out, the couple has talked about possibly going through the adoption process. Kim and Kanye know that whatever is meant to be, will be."

Kim and Kanye have always been keen to add to their family but the 'Keeping Up With The Kardashians' star played coy when she was asked about expanding her family last month.

She said: "Three is a lot, [but] you never know. My mom [Kris Jenner] kind of prepped me [for what having three kids was like], and it was crazy because when everyone found out that I was having a third, everyone had a crazy story ... like, 'Two was great, but three, you are outnumbered. You are exhausted'... Like, all of these nightmare stories. [Having a brother for Saint] would be nice. It really would, but I'm very full right now."