The 2019 movie was a massive success for writer-director Rian Johnson, previously best known for the divisive blockbuster Star Wars: The Last Jedi.

An Agatha Christie homage about a family patriarch murdered in his sprawling mansion, Knives Out on Tuesday passed $300 million (S$420 million) at the global box office, despite a budget of just $40 million.

"It's always been in my head that if this one does alright, then it'd be really fun to do more of these," said Johnson.

The film was nominated for the best original screenplay Oscar -- losing out to history-making Parasite -- and last week studio Lionsgate confirmed a sequel.

"It's really more like another case, another set of suspects, another type of mystery, but with Daniel's Benoit Blanc character there to solve it," said Johnson.

He has begun writing the second film, with plot details under wraps -- "I'm just starting to fish around... There will be a murder, I can say that!"

But there will be "a whole new cast and whole new location and everything".

"That's the other fun thing about thinking about the next one... what other actors could we rope into this?" said Johnson.

Johnson first came up with the notion of Knives Out a decade ago.

Read Also
Knives Out sequel officially in the works 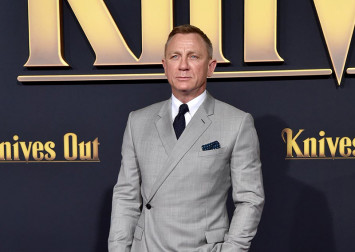 Having dedicated four years to making 2017's space epic The Last Jedi for Disney, Johnson was itching to quickly switch to something galaxies away from that "big filmmaking world".

"I had a great time working on Star Wars... I genuinely enjoyed that aspect of it," said Johnson.

But the idea of a film "we could make quickly, and just have some fun with actors talking in wood-panelled rooms -- you can see how that would be appealing," he added.

Johnson remains linked to a brand new Star Wars trilogy, announced in 2017 but plagued by rumours it had been cancelled after the experimental Last Jedi enraged die-hard fans.

"I still have a great relationship with Lucasfilm, and nothing's been announced," said Johnson.