Kourtney Kardashian goes into menopause due to IVF treatment

Kourtney Kardashian went "into menopause" due to IVF treatment.

The 42-year-old star - who has Mason, 12, Penelope, nine, and Reign, seven, with former partner Scott Disick - has been undergoing fertility treatment because she and fiance Travis Barker want to have a baby together but she admitted the process "hasn't been the most amazing experience" and she was particularly unimpressed by "rude" trolls online commenting on the weight she's gained as a result.

In a clip from new reality show The Kardashians, Kourtney said in a confessional: "Travis and I want to have a baby, and so my doctor took us down this road of doing IVF.

And in another conversation with her mom, Kris Jenner, the Poosh founder opened up about the side effects of the treatment.

"It's so rude to comment on people when you have no idea what they're actually going through. The medication they're giving me, they put me into menopause. … Literally into menopause."

Kris asked: "Based off of what, a drug?" 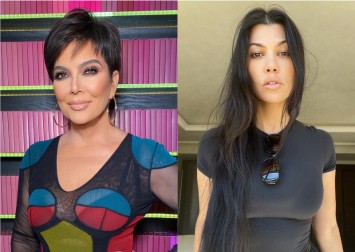 The new clips was released hours after the first official trailer for the Hulu show dropped, and the promotional film showed Kourtney and Travis - who has Landon, 18, and 16-year-old Alabama with ex-wife Shanna Moakler - attending doctors' appointments together.

The 46-year-old drummer was instructed to "put a sample in a cup", prompting Kourtney to quip: "Turn the mics off. You don't get the audio [for that]."

Although Travis will feature in the family's new show, Kourtney recently insisted she wants to "protect" their relationship as much as she can, having played out her on/off romance with Scott on camera for years.

She said: "I definitely hold my relationship really close. It's so sacred to me and I am very protective of it. I think I've learned a lot of lessons.

"There is a lot of us on there, and we've had such a good time doing it because we have such a good time when we're together, but I definitely want to protect it as much as I can. But also, this is my life."