The 32-year-old singer turned actress confirmed her engagement to fiance Christian Carino - whom she has been dating since the start of 2017 - in October this year, and although she's barely had time to think about her nuptials after being so busy with her new movie 'A Star Is Born', sources say she wants the event to be extravagant.

One insider said: "Gaga is so over the moon at the moment. She is constantly telling those close to her how grateful she is to be at this point in her life and work with such incredible artists and be with the man she loves so dearly.

"Gaga is incredibly elated about her engagement, but because of how busy she's been with [A Star Is Born], she can't even begin to think about a wedding.

"She had no idea the film would be this successful, and she is completely taken aback by the public's reaction. Gaga's first love and one of the most important things in her life are her fans. She doesn't want to let anyone down by not giving 100 per cent right now." 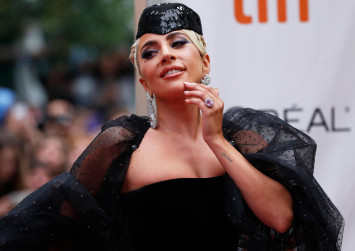 But despite being too busy to get a head start on wedding planning, the 'Million Reasons' hitmaker still has the support of her husband-to-be, as he's "so proud of her success".

Speaking to 'Entertainment Tonight', the source added: "Christian loves to make her happy and he is so proud of her success. He is patient because he was a huge influence in her doing the film to begin with. The amazing thing about their relationship is that he understands her work and career and he is there to guide her.

"This relationship is different because Christian understands her on a more intimate level. She trusts him fully and feels totally secure around him. They don't get a lot of private time, but when they do, they love to have private getaways in fancy hotels."

Gaga and Christian were first reported to be engaged in November last year, but neither of the couple confirmed the news until almost a year later when Gaga referred to her long-term love as "my fiance".