Jeff Chou was intimidated by his leading lady Joanne Peh on the first day they met on the Last Madame set.

He told The New Paper: "It was a big challenge (for me) as we had to shoot an outdoor scene where we were already in love with each other.

"I was a little afraid of her because she is a veteran actress, and when she does not smile, she can seem a little intimidating.

"What's more, I was also not used to the (humid) weather (in Singapore) and I had to shoot in a three-piece suit."

Chou was also unaware that Peh was a mother of two young children until later, when they had slowly broken the ice and built up their chemistry.

Although he felt more relaxed after getting to know her better, Chou - who said he is "quite conservative" - was still nervous about shooting the sex scene.

He tried to keep in shape by eating salads and working out whenever he could, to take his mind off it.

"This was my first nude sex scene. Even when I was modelling in Taiwan, I did not have a lot of shoots that required me to take my clothes off," said Chou, who went on YouTube to watch examples of sex scenes in films such as Titanic the night before the shoot.

"I still remember when (the director) said 'cut', I just turned away because I was too afraid to look.

"But I believe this was a pretty big step forward for Joanne and me." 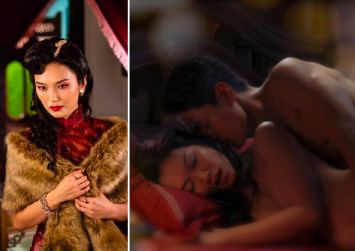 When asked to rate how sexy Peh was, Chou immediately scored her 10 out of 10.

"She is quite hot, and I didn't think she was already married and had kids the first time I met her. She keeps herself in pretty good shape."

But Chou emphasised that the scene was not all about sex.

"What was more important was the leading up to it.

"There was already sexual tension between Joanne and me in the show, and that scene was just the breaking point for both our characters, depicting a forbidden love so powerful that it finally happened."

Chou was grateful to Peh for being professional throughout the filming, even as he was always conscious about Peh's marital status and how his physique would appear on screen.

"She did not hold back and gave it her all, and that helped me to get into the moment, which made everything feel natural."