Lee Teng's wife returns to Taiwan to give birth, wore a protective suit for her flight

Lee Teng and wife Gina in her protective suit.

While the threat of Covid-19 lingers, people are taking precautions and some are being extra careful.

The local TV host told Lianhe Wanbao recently that his wife Gina Lin has returned to Taiwan to prepare for the birth of their child and she wore a protective suit for her flight.

Lee Teng explained: "She's six months pregnant so we'll definitely be worried. But the more dangerous you feel things are, the more you'll care about safety. We've been very careful and she wore a full-body protective suit on the flight. However, it's a four-hour flight so she might feel restless."

In March, the 37-year-old announced his engagement to Lin and said that the coronavirus didn't ruin his plans. Two months later, he revealed that she was pregnant. Lee Teng said that the couple has also registered their marriage in Singapore.

Lin is expecting a baby boy and he's due around the end of September or early October. Lee Teng will fly over at the end of August after he wraps up his work and he will accompany his wife in the delivery room.

"I heard a lot of guys say that it's scary to be in the delivery room but I have a high tolerance level for blood and I've also seen video clips of Caesarean deliveries," he said, adding that his wife has not decided whether she wants a natural birth or a Caesarean section.

For now, the couple communicate daily via video calls to check on each other, with Lee Teng noting that his wife wants to be pampered more now since he's not physically with her. She also had severe morning sickness during the initial stages of her pregnancy, but she no longer has this issue now. 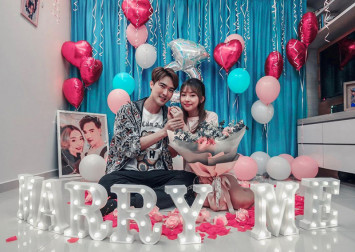 After the baby's born, Lee Teng will stay with his family till November before he returns to Singapore for work. His wife will stay in Taiwan for a little while longer until the Covid-19 situation in Singapore stabilises. Besides, the soon-to-be father shared that he doesn't want his baby to take a plane that early.

To prepare for the arrival of his child, Lee Teng has bought milk bottles, a pram, a cot, and other baby essentials. If there's something he's unsure about, he'll ask Kate Pang (wife of Andie Chen).

He also said that Sheila Sim, who is seven months pregnant, will share her feelings with him which allows him to better empathise with his wife.

He told the Chinese daily: "Pregnant women are especially sensitive so I'll care more for my wife and give in to her more."

Lee Teng also revealed his intention to take classes so he can learn how to feed his baby, change his diapers and shower him.

"These are all things I want to do," he said.