More than three years after revealing the identity of her son's father, getai star and actress Liu Lingling has finally appeared on TV together with her family.

The trio were some of the contestants on yesterday's (Feb 28) episode of Dad, I've Got Your Back, a local game show which is broadcast on Channel 8 and available on meWATCH.

Lingling's eight-year-old son Xiangxiang participated in the games together with his father, nicknamed Daddy Khoo in the show, while the 59-year-old showbiz veteran supported them from backstage.

At the start of the episode, Daddy Khoo told host Lee Teng that within the family, he's the one who helps the boy with his homework, considering how Lingling is often busy with work.

Backstage, Lingling also remarked: "He's more like a mother and I'm more like a father." She added that her husband could be rather strict with their son at times, while she's more loving.

Back in 2013, Lingling had kept her pregnancy and delivery a secret, and it would have remained so had it not been for bad timing. She had promised to attend a getai award show but had to miss it as she went into labour the day before.

She declined to reveal the boy's surname as well as the identity of his father — a move which resulted in backlash and rumours that she had bought or adopted her son.

She came clean in 2018, admitting that Xiangxiang was conceived through In Vitro Fertilization (IVF) and that the boy's father is her husband Daddy Khoo.

In an interview with Lianhe Zaobao on Feb 25, Lingling said that her family was invited to participate in the game show last year.

After discussion with her husband, they decided to participate as it would be a good memory for the family in the future.

"I didn't want to think about the rumours and reports from the past, and I don't know what people might say to Xiangxiang in the future, but I want to show him love so that he knows that his parents love him."

Read Also
Liu Ling Ling: No regrets having baby at 50 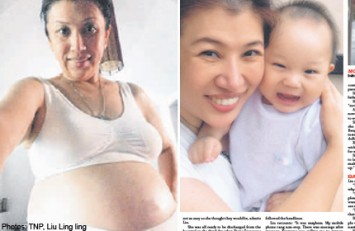 Although Xiangxiang might look back on these memories fondly in the future, the filming process most definitely wasn't a walk in the park for the young boy.

When his mother asked him if he'd like to join another programme in the future, he told her, "No, it's not fun," citing the long hours.

Lingling used it as an opportunity to remind him how much she loves him.

"When we went home, I told him, 'See, it's so difficult for mum to earn money. I never said no or that it's not fun, because I do it for you.'"

Thankfully, Xiangxiang understands what his mum is getting at.

"He seems to have matured after the show. Now he often tells me, 'Mum, I love you', or ask me, 'Mum, are you going to work?', it's like he treasures me more now," she said.

Dad, I've Got Your Back is available on MeWATCH.