Liu Yifei on playing Mulan: The men treat me like 'one of the guys'

With her soft and feminine features, one might expect actress Liu Yifei to have a hard time disguising herself as a man for her titular role in Disney's live-action film Mulan.

However, the 33-year-old actress explained in an email interview that blending in with the dudes wasn't difficult at all. On the contrary, she feels like one of them.

She said: "I felt like I am a man because I fit in so well. One day, we were working and we were all dressed in costume and an actor patted my shoulder, and asked me a question. But when I turned around, he realised it was me and not the guy he wanted to address.

"He was so surprised and apologetic. So when you're surrounded by men, you feel like they're your buddies. They don't treat me like a girl. I'm just one of the guys to them."

Disney's Mulan is an adaptation of the legendary Chinese ballad that tells the story of a girl who disguised herself as a man to fight in the war in her father's stead.

This film is also a live-action remake of the 1998 animated classic which captured the hearts of many and also featured the iconic song Reflection sung by Christina Aguilera.

The film has gathered many renowned Asian actors in the industry apart from Yifei, such as Jet Li, Gong Li, Donnie Yen, and Cheng Pei-pei.

And here's what Yifei says about them — along with her thoughts about Mulan, and the character's resonance with women, and the Asian audience.

Q: What was it like working with Donnie Yen, Gong Li, and Jet Li? What did you take away from working with them?

A: I admire Donnie's work, not just as a kung fu superstar. He's also really good at performing and acting. And he's a really warm guy. Gong Li is like the queen of movies. So, people think I'm so lucky to have the opportunity to work with her, and it is a great opportunity. She is as good in person as the character she plays on screen. You don't think that she's a superstar when you talk to her. She's really real.

Q: And then Jet Li. You got to rescue Jet Li.

A: Oh, speaking of that, Jet even laughed that day when I had to rescue him. It was the other way around this time because he had to save me in The Forbidden Kingdom. He and Jackie Chan. 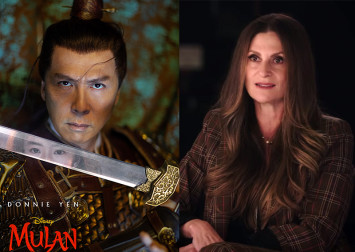 Q: How would you describe Mulan — the one that we see on screen that you helped create?

A: We see many sides of her, beyond the Ballad of Mulan. We see her as a human being, as a girl, as a young woman. Everybody admires her as a warrior but is there a fragile side to her? Will she sometimes hesitate or be afraid, but still choose to carry on? Yes, and we see that.

Q: Was there anything special in the way you approached playing Mulan on screen? Anything that helped you get into character?

A: I would say focus is really the number one. Each day I allowed myself to forget who I am for the moment. You have to kind of lose yourself and not think about just how brave Mulan is. Yes, I am playing a hero, so we need to bring out that side, but I think every human being is complex, and complex is so beautiful. And that's where the energy of the character is.

Q: Mulan is brave, loyal, and true. In what ways will that empower girls and women who are watching it? What do you hope they'll take from her?

A: I hope they will not focus on just what they get in life, but trust their instincts. Be true to themselves for sure, because they are the only ones who can surprise themselves in their lives.

Q: When you finally embraced Mulan, did that change the way you moved or acted?

A: It was more of an inner moment for me. It's Mulan's inner moment when she decides to rip off her disguise. She doesn't want it anymore, so it all comes from there, for sure. But I think it also means that she is breaking out of boundaries. It's that simple. She's realised that she deserves the freedom of being a woman and who she wants to be. 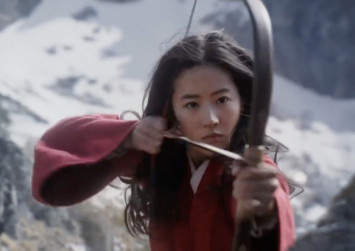 Q: Audiences in Asia are excited about this film. Why do you think Mulan resonates so well with Asian audiences?

A: It's a very well-known, legendary story to everyone in China, but I think it works well in the United States, too, because it's universal, and we're all human beings, and human emotions are universal languages. Mulan represents honour and bravery, but for me, it's also that she's willing to discover herself and willing to go forward.

I think that's important to audiences too. Not many people would be willing to do that in the first place. Mulan doesn't really know what she's facing but she's still going with her instincts.

Q: What does honouring your family look like to a Chinese person today, and is it still important, like it is in this movie, to Chinese culture?

A: I think it's important in every culture that we treat family respectfully. We're being thankful and we're showing love. I think if you ask me what family means, I would say it is unconditional love. So at this point in time, I think it's still another universal language.

Q: What do you hope audiences experience when they see the movie? What do you want them to think?

A: I will respect whatever opinion they give because individuals all feel differently. But if there's some moment in the movie that touches them, even for some reason they don't know, I will think that we did something good. And I hope that they open up and dream well about themselves, which is a theme in this movie, too.