His father Drue, 59, says the pair have been dating for over a year, and he and Ahlamalik's mother Laurie, 55, have both met the star.

He told TMZ: "Love has no age. My son is livin' la Vida Loca, and I'm just happy for him."

According to Drue, Madonna and Ahlamalik first met in 2015 when he auditioned for her Rebel Heart tour, and Madonna was so impressed with the dancer's moves that she personally picked him out of the audition group.

However, he says the pair only started dating a year ago but things have already gotten serious.

Drue told the website that Madonna hosted Ahlamalik's family at one of her shows in Caesars Palace in Las Vegas and invited them for dinner in her suite afterwards.

He also claimed that Madonna is so serious about him that she has also invited his family to come to her shows in London and France early next year, and they have already booked their flights.

Speaking previously about the relationship, Drue revealed Madonna told the family that she is in love with the dancer.

Drue told the Daily Mirror newspaper: "Madonna went on and on about how much she cares about our son. She said he's intelligent and very talented.

"She told us she is so much in love with him and that we didn't have anything to worry about as she was going to take care of him. 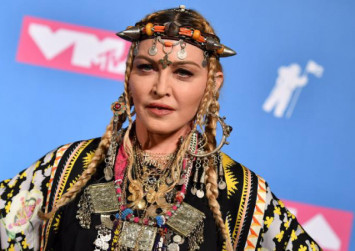 "We know there's a huge age gap between the two - 36 years. Madonna is two years older than me. But I have told my son love doesn't have an age range when you're consenting adults.

"I asked him how he feels about her and he says he has never been happier."

And Laurie believes the pair could tie the knot. She said: "We're both big fans of Madonna, but we do worry about him and of course we don't want him to get hurt.

"But I believe Madonna is going to stick with him because of the talent he has. As well as a dancer, he's a songwriter, too. We met her after a show and it was incredible. The first thing she said to me was, 'Wasn't he fantastic?' You never know, they could get married."