Malaysian singer who died of Covid-19 days after giving birth was not vaccinated, says husband

It is unclear if Siti Sarah had yet to receive an appointment date for her vaccination, said her husband.

KUALA LUMPUR - Malaysian singer Siti Sarah, who died from Covid-19 three days after giving birth, was not vaccinated and received treatment late, according to her husband.

Mr Shahmira Muhammad, a comedian better known as Shuib Sepahtu, said he wanted to admit his 36-year-old wife to a private hospital but was told that there were no beds left for Covid-19 patients.

Recounting the moments in the ambulance with her, Mr Shahmira said: "I wanted to take my wife to a private hospital, but they were full. Then it occurred to me that no amount of money could save my wife. This is what happened."

He added: "My wife wasn't vaccinated... The infection had spread to most of her lungs. All her organs could not function well."

Mr Shahmira also disclosed that his wife, whose death devastated her fans, had been experiencing low oxygen levels at home, but he had dismissed the readings. 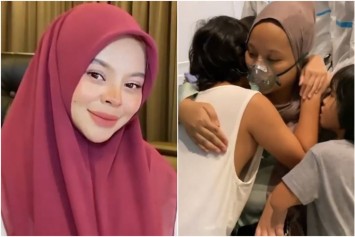 She had been eight months pregnant with her fourth child, Ayash Affan, who was delivered via caesarean section on Aug 6, two days after she was hospitalised and put in an induced coma.

Her husband and their three children were also confirmed to have contracted the virus on July 25. Her brother is currently hospitalised with Covid-19.

Mr Shahmira said the family contracted Covid-19 after his maid shook a friend's hand while taking out the trash.

It turned out that the maid's friend had Covid-19.

"Before my wife passed away, my maid passed away last Friday. Covid-19 is real. I used to be one of those who didn't believe in Covid-19 but then it happened to me," Mr Shahmira said in a Facebook live video on Monday.

It is unclear if Siti Sarah had been given an appointment date for vaccination, but Mr Shahmira said he had already received his first dose.

Her plight highlights the gaps in Malaysia's war against Covid-19 as daily cases and deaths continue to surge even as the country ramps up vaccinations.

Both public and private hospitals are bursting at the seams, with bed shortages.

On Wednesday, the country reported 20,780 new infections, the second-highest daily tally so far in the pandemic, and another 211 deaths.

In addition, she said that data has shown that the number of deaths correlated with the number of patients in intensive care units (ICUs) and active cases.

The Delta variant is also contributing to the high transmissibility of the virus, particularly if there is poor adherence to safety measures, she noted.

The health ministry said on Wednesday that more pregnant women were being infected with Covid-19 and that they they were at higher risk of severe infections, particularly in the second and third trimesters.

Expectant mothers should be vaccinated before the third trimester to reduce the risk of complications, Health director-general Noor Hisham Abdullah said in a statement.

The number of cases involving pregnant women began to rise in October  last year with an average of 200 cases a month. In May, this had surged to 850 cases, followed by 899 in June.

The percentage of pregnant women who required intensive care rose to 5.3 per cent in August from 3 per cent in July.