Actor-comedian Mark Lee faced one of the toughest challenges in his life when his daughter was diagnosed with kidney disease in 2018, but he had to hold back his tears and stay strong.

The 52-year-old, who has one son and two daughters, found out that his youngest child Calynn had a rare kidney disease known as glomerulonephritis. She was five years old at the time.

In the latest episode of talk show The Inner Circle on Wednesday (April 21), he opened up about the day the doctor had to take samples from her kidney to determine how serious the disease was.

If the results showed that her illness was acute, both her kidneys would fail within nine months.

Even as he watched the needle being inserted into her kidney, he knew he could not cry, as his wife, Ms Catherine Ng, was beside him and needed him to support her.

"If I wasn't strong, she would have fallen apart, so I held back my tears," he said.

But talking to host Guo Liang on the show, he could not help but break down a few times as he recounted rushing to the hospital before she was sedated for the procedure, just in case it was his last chance to see her.

The period was especially trying for him as he was directing his first movie, Make It Big Big (2019), while also starring in it. 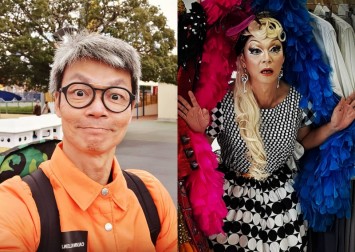 "I think this is the saddest part of being in the movie industry," he said. "We were in a rush and many companies had invested in the movie, so I was definitely under a lot of pressure."

The showbiz veteran, who has been in the industry for more than 20 years, also did not want to burden his wife with his worries.

"I was sad, but I think my wife had it even harder. After all, she did carry Calynn in her body for nine months," he said, adding that he is not someone who will confide in others.

But that dark period is now behind him, as his daughter's red blood cell count returned to normal after three months of treatment and the disease is under control.

In fact, she appeared as a surprise guest on the show, together with her mum and siblings Marksonn, nine, and Calista, 13, looking healthy and adorable.

As the show drew to a close, the doting father had some words of advice for his kids: "Your studies are important, but your health should come first. I want you to grow up healthy and remember how good I am to you."