In a shocking tell-all video, local actor Mark Lee told Singapore that he was a gambling addict, how he spiralled out of control, and identified four steps to recognising when one is getting addicted.

The video was published on the National Council of Problem Gambling's Facebook page and it shocked netizens who did not see this coming from the popular 51-year-old.

In an interview with Shin Min Daily News yesterday (Nov 30), Mark offered more details on the extent of his habit.

The comedian also admitted that he had won more than $100,000 before at the lottery, but it wasn't enough for him. He felt that money came easily, but he also blew through it easily.

"Gamblers always have this mentality — if you win $10,000 today, you hope to win more next time so you'll place bigger bets. You'll also celebrate after your big win, so when will you think about stopping? That's how you sink even deeper," he explained.

Not many people know that besides being an artiste, Mark Lee is also a businessman. There’s another secret Mark holds that he will reveal to all now…

As Mark's descent into addiction took place during his time on the 1996 local variety show, Comedy Nite, director-actor Jack Neo (also Mark's longtime friend and co-worker) tried to knock some sense into him.

Mark recounted: "When Jack found out, he tried different approaches to get me to quit gambling. He would tell me that it'll affect my future and my family. I didn't listen and continued to gamble."

Jack's words weren't enough to make Mark turn over a new leaf. But, a simple sentence from Mark's mother made him see the error of his ways and gave him the motivation to walk away from that destructive lifestyle. 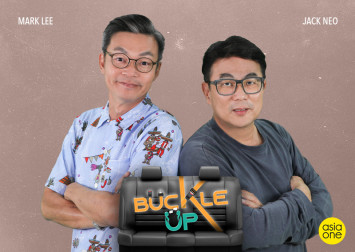 Apparently, his mother knew that he loved to gamble but she never tried to dissuade him. She just told him plainly: "I'm old, it's okay. You're still young, you have to take care of yourself in the future."

Her words cut so deep that till now, Mark confessed that he doesn't even dare to buy 4D.

When asked if he ever borrowed money from loan sharks, Mark said that he didn't because he "knew their ways". He also made sure to only borrow from his 'brothers' and from people outside the media industry to 'save face'.

It was a dark and shameful past which would make public figures think twice about revealing it. But Mark believes that he should speak up precisely because of his celebrity status.

He told Shin Min: "Since I'm a celebrity, I should share my ugly past to encourage others to stay away from gambling because you might lose your family and all your wealth."

Correction: Mark Lee's representative has clarified that he spent $5,000 a month on 4D.

#Local celebrities #Gambling #In Case You Missed It