Last year, Marvel Studios President Kevin Feige hinted that the studio was working towards bringing a new LGBTQ character into the Marvel Cinematic Universe and now, according to the That Hashtag Show, Marvel have begun their search for an openly homosexual actor to play the lead role in their 2020 feature film 'The Eternals'.

The studio is said to be searching for an actor who "physically looks like a superhero" between the ages of 30 and 49 and while there is no preference over ethnicity they would prefer the part to go to a gay actor.

The story of 'The Eternals' takes place millions of years ago and sees the result of genetic experiments on humans conducted by the Celestials create super-powered individuals and villainous other beings known as the Deviants, who battled throughout history to become the ultimate race. 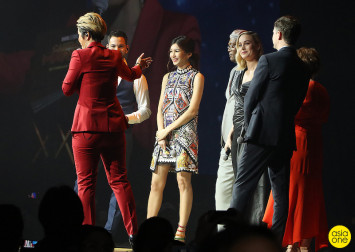 There is no word yet on the identity of the gay character and the film is scheduled to beginning shooting in the UK in September and will be released in 2020.

Chloe Zhao will direct the film, 'Ruin' writers Matthew and Ryan Firpo have signed up to pen the script for the movie, and Feige will produce the picture.

Marvel's latest release is 'Captain Marvel' the 21st film in the Marvel Cinematic Universe and the company's first ever female-led standalone superhero film.

The highly anticipated movie stars Brie Larson as Carol Danvers, a former US Air Force fighter pilot, who turns into one of the galaxy's mightiest heroes and joins Starforce, an elite Kree military team which eventually help her as she is caught in a galactic conflict between two alien worlds.