Marvel's Eternals: Who are the Celestials, and where have we seen them before?

Marvel's Eternals is hitting the cinemas this November, adding a new sci-fi fantasy chapter to the epic Marvel Cinematic Universe, but before we jump into who the new band of superheroes are, it's important to know who their creators are, and where we've seen them before.

While the core group of 10 immortal Eternals are new characters previously unseen or heard of in the MCU, these superpowered aliens didn't just appear out of nowhere (aha pun intended).

As indicated in the movie's trailers and teasers, the Eternals were created by the Celestials to fight against the Deviants.

Sound familiar? It should if you've been keeping tabs on the MCU.

So who exactly are the Celestials, and what's their story? And have we met them prior to this mega-medley of a movie?

The simple answer is yes, you've come to the right refresher course.

Who are the Celestials?

In Marvel Comics canon, the Celestials are the first lifeforms created in the Marvel Universe and just as they were present at the beginning of creation itself billions of years ago, they too are also responsible for the creation of other life forms, including the Eternals and Deviants.

As an ancient race, the Celestials also possess vast matter and energy manipulation capabilities and are extremely powerful.

In fact, the Celestials are also notorious for their utilisation of the Infinity Stones to their advantage.

The Celestials made their debut in The Eternals #1 (1976), written and drawn by the legendary Jack Kirby, and have been an essential part of the Eternals' origins.

Fortunately, when The Eternals comic series came to an end, the presence of the Celestials expanded to other books.

As the original creators of the Infinity Stones, the Celestials are indirectly responsible for the many wars and battles involving the Stones and have come in constant conflict with the Skyfathers (Odin, Zeus and Vishnu) where the Skyfathers - having seen the powers the Celestials hold - pledge to not intervene with their plans for 1000 years.

Yes, the Celestials are responsible for the X-gene too, so if it wasn't for their experimentations with life-forms, mutants wouldn't have existed either.

Yes, we know - the mutants have not officially appeared in the MCU… yet.

How the Celestials go about doing their business experimenting on life is rather simple, and comprises four different visits to a planet.

A specialised team of Celestials, referred to as "Hosts", will review the lifeforms they've created to determine if they're worthy of existing any further.

The first host will visit a planet to seed life and review the resulting lifeforms. The second and third hosts will later visit to study and inspect the planet's evolutionary process. Eventually, the fourth host will finally arrive and judge its creation.

If the Celestials deem a planet's evolution to be successful, they will wipe all memory of their visit and allow the planet and its occupants to thrive and live happily.

In the case where the Celestials deem their project unsuccessful, all life on the planet will be exterminated.

Believe it or not, the Celestials have made several appearances in the MCU.

Whilst the upcoming Eternals movie will likely see more Celestials (and in all their glory too), fans have met not one, but three Celestials in past MCU films - specifically in both Guardians of the Galaxy films.

The floating head of Knowhere has been featured in three different MCU movies: Thor: The Dark World (2013), Guardians of the Galaxy (2014), and Avengers: Infinity War (2018).

Although seen as a home planet to a mining colony, outlaws and the famed Collector, Knowhere is actually the decapitated head of an unknown Celestial being.

In Thor: The Dark World, Sif and Volstagg arrive at the Collector's museum on Nowhere to deliver the Aether to him for safekeeping.

In Guardians of the Galaxy Vol. 1, the guardians arrived at Knowhere with the intention of selling the Orb to the Collector.

Knowhere makes yet another appearance in Avengers: Infinity War, when Thanos arrives at the Collector's museum to retrieve the Aether.

Likely the only Celestial we have seen alive and up close, Ego made his massive debut in Guardians of the Galaxy Vol. 2, to reveal himself as Peter Quill's father.

A living planet with a humanoid extension of himself, Ego sought to find meaning in his life and, to achieve this end, planned to remake the entire universe via an omnicidal extinction-level event known as the Expansion.

And to do that, he had to first create offspring, which he did across the universe, siring children, and eventually killing them for being failures. Hey, we did say that's what Celestials are.

Putting Quill in a trance to comply, Ego became the big evil antagonist of the movie.

Quill later snapped out of the trance when he found out that Ego killed his mother, and later killed Ego together with the Guardians' help in order to thwart Ego's Expansion plan.

Eson the Searcher is a Celestial that once wielded the Power Stone.

An extremely ruthless and destructive being with a God complex, Eson uses the Power Stone to destroy an entire planet.

Although Eson didn't really appear as an active character, he was seen in a hologram in Guardians of the Galaxy Vol. 1 wielding the power stone.

How do the Celestials and Eternals connect?

Well, for one thing, the trailer shows off a new Celestial - Arishem the Judge.

As his name suggests, Arishem is a Celestial who is tasked with judging whether the civilisation of a planet should live or die (remember the four-step life creation plan).

Arishem's powers include cosmic energy control with an unknown upper limit and he wears an armour that is able to withstand planet-shattering strikes with tremendous ease.

As mentioned in the movie's trailers and their comic book origins, the Celestials and Eternals are connected simply because the Celestials created them.

After the Celestials finished their experiments on Earth, they left the Eternals behind to protect humans against the Deviants, to ensure that their experiment will be a success.

So if the Eternals are that powerful, could they have stopped Thanos in his mad quest to destroy half of the life in the universe? Very likely, so why didn't they? 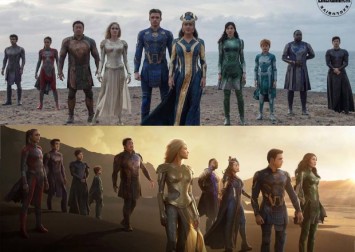 As the trailer for Marvel's Eternals explained, the Eternals have been prohibited from interfering, unless against the Deviants, so there's your answer.

With Deviants still hidden in the shadows this long, some of the Eternals have decided to live away from humanity, whilst others choose to live with humans for some time, even forming relationships with humans (*cough* Sersi and Dan Whitman)

And there you have it - your quick breakdown on who the Celestials are, and where we've seen them before prior to their big debut in the upcoming Eternals movie.

Although we've seen three of the Celestials in past MCU movies, Eternals will likely introduce viewers to more who are not only alive and all-powerful, but hopefully in their original form, armours and all.