Matt Damon has to call Ben Affleck to "fact check" what's happening in his friend's life.

The Stillwater actor admitted he reads so much gossip about his pal - who recently reunited with former fiancee Jennifer Lopez - that he often texts him to find out the truth about what he's been up to.

He told People magazine: "Well, I mean, it's real-life stuff. We each got a whole mess of kids. We text pretty much about everything. There's so much in the press about him that normally I'm just fact checking things I read. 'Did this happen?' He's like, 'No that didn't happen.'"

Ben and Jennifer caused a stir earlier this week when the Argo star was pictured with his hand on his girlfriend's butt on vacation for her 52nd birthday.

However, Matt insisted he has no insider information about the moment - which echoed a clip from Jennifer's 'Jenny From the Block' music video almost 20 years ago - or the couple's romance.

He said: "All the pictures that have come out are the same ones that you see. I don't know anything you don't know."

The 50-year-old actor recently admitted he is "glad" the couple are back together. 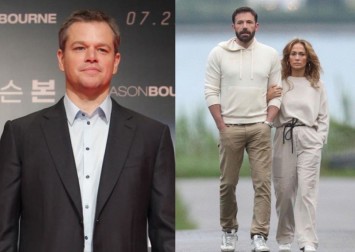 He said: "I'm just so happy for him. He's the best. He deserves every happiness in the world. I'm glad for both of them."

But in May, Matt insisted he had no idea if the pair had got back together but "hoped" the speculation was true.

Asked about the rumours on Today, he joked: "There's not enough liquor in the world for you to get me to say something about that.