Aloysius Pang's colleagues from his talent agency NoonTalk Media sang a xinyao song, Voices From The Heart, as a tribute video played during the Star Awards ceremony.

At broadcaster Mediacorp's annual awards ceremony, a video featuring Pang's childhood photos, clips of him directing his own film and photos with his fans was aired. The actor died at age 28 earlier this year after a military training incident.

Pang's colleagues from his talent agency NoonTalk Media - Xu Bin, Timothee Yap, Zong Zijie and Gavin Teo - sang the song, Voices From The Heart, as the video played. The song was bookended with Pang's own singing.

Pang's girlfriend Jayley Woo, as well as his friends Chen Shucheng and Ian Fang were all caught on camera shedding tears during the segment, while his manager Dasmond Koh looked emotional. The camera also panned to Pang's brothers, who were at the ceremony. The rest of the night took a more celebratory tone for its silver jubilee, with veteran artists dominating the limelight.

Chen Hanwei, 49, and Zoe Tay, 51, took home the top honours of the night. The two won Best Actor and Actress for the same drama - A Million Dollar Dream - where they played a married couple.

Hong, who has been nominated over ten times, won her very first Top Ten - after decades in the industry.

She looked completely baffled as she collected her award. Onstage, she said: "Even if it's my very first, I'm contented. This is enough."

She shared the stage with Pan Lingling, 49, who won the Top Ten award for the second year in a row. Pan and Hong had a public spat that made headlines last year, after Hong broke off their friendship via a lengthy WhatsApp message that was sent to 50 of their mutual friends. The two did not make mention of their quarrel or interact with each other onstage.

Read Also
Star Awards 2019: The night of cape gowns and a gorgeous parade on the red carpet 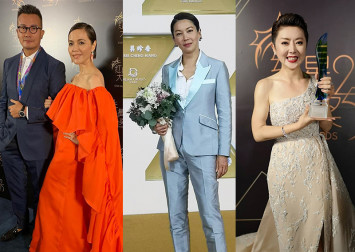 He joked: "This must be a year for the Pioneer Generation."

Xiang Yun, 57, won the Evergreen Artist Award. She revealed that she had a rough year and had thought about leaving the industry, but the award has given her more confidence to keep acting.

Best Supporting Actor and Actress went to Chen Shucheng, 69, and Lin Meijiao, 55. Chen dedicated his win to a "faraway friend" onstage. When pressed, he declined to clarify if he was referring to Pang and said: "Let me keep this person in my heart." The Special Achievement Award was given to Chew Chor Meng, 50, who received a standing ovation. There were tears in the crowd as the actor, who was confirmed to have Kennedy's Disease in 2008 - a motor neuron condition - talked about his condition and his love of acting.

He said: "My health these past ten years have not been good but I'm very thankful that I can still act."

The ceremony also announced a new season of Star Search after a nine-year hiatus. The local talent competition gave birth to stars like Tay and Chew. Past contestants of the competition including Jazreel Low from 1988's Star Search, Florence Tan from Wok Of Life (1999) and Jeff Wang, known for his role as a villain in Holland Village (2003), were also in attendance at the show.