Michael Keaton was in the toilets when he was announced as a SAG (Screen Actors Guild) Award winner on Sunday night (Feb 27).

The 70-year-old actor was honoured with the Outstanding Performance by a Male Actor in a Television Movie or Limited Series honour for his role in Dopesick as doctor Samuel Finnix, but he kept presenter Salma Hayek, 55, waiting as he nipped to the bathroom.

The House of Gucci actress announced: "And the award goes to Michael Keaton, Dopesick."

The audience continued clapping as they waited for the actor to rush up on stage.

Michael then blamed the delay on the busy men's room.

He began his speech: "Thank you very much.

"Sorry! Quick trip to the men's room. It was packed, by the way. This is so nice, thank you very much. Really, I'm truly grateful."

The Spotlight star later fought back tears as he dedicated his award to his late nephew, who passed away following an overdose in 2016.

He said: "I've sent my pre-emptive thanks for everyone involved in this, but mostly… given the subject matter, this is for my nephew Michael and my sister, Pam.

"I lost my nephew Michael to drugs and it hurts."

Earlier in his speech, Michael expressed his gratitude for the platform he has and how shows such as Dopesick can instigate change. 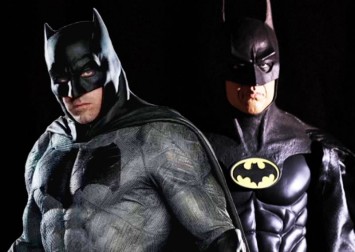 He told the audience at Santa Monica's Barker Hangar: "There's an argument to be made that a night like tonight is self-serving, narcissistic, it's legitimate argument, that said, I will tell you and I speak for myself, I am so fortunate. We could spend a week here talking about how fortunate I am and I know you'd love that - who doesn't want to listen to Mike ramble on for a few hours?

"I have a job where I can be part of a production like Dopesick that actually has brought conversation, actual change. Who gets to have that job? How fortunate am I that good can come of something I do just because I wanted to become an actor.

"There's a mass of inequity in the world.

"In Dopesick, when you talk about addiction, the way to heal the problem is to accept you have a problem. Not our world, the entire world - economically, racially, socially, financially, there's massive inequity in the world.

"There's fair and unfair and not a lot of room in between.

"I can feel right now the rolling thunder of eye roll coming across, people saying things like, 'Shut up and act'. The acting I'll quit, the shutting up not so much.

"I am blessed to be able to do something that might improve someone's life, I'm the most fortunate person."