Of all the things in the world to be compared to, why did actor Park Hae-soo liken himself to a traffic light? Hint: It's to do with his clothes.

During a press conference held last Wednesday (June 22) for Money Heist: Korea — Joint Economic Area, the host pointed out an interesting fact about Hae-soo — he seems to have a knack for being cast in shows where he wears monochrome outfits.

This good-humoured observation was responded to in kind as Hae-soo replied: "I think [my outfits] are like traffic lights so maybe I'll wear yellow next time."

The red jumpsuit is part of the disguise that he and his team wear in the new Netflix series, where he plays Song Jung-ho, a North Korean concentration camp escapee with violent tendencies.

Jung-ho, aka Berlin, joins a team of misfits as they attempt to pull off a grand heist — to the tune of 4 trillion won (S$4.3 billion) — in the joint economic area between a tentatively unified Korea. 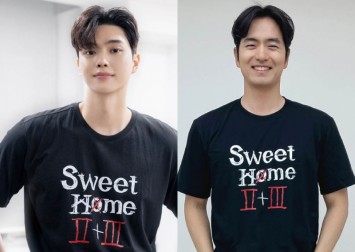 It wasn't easy for Hae-soo to step into the role of Berlin — he had to learn the North Korean dialect to properly take on Jung-ho's persona.

"It was very, very challenging," he said. "Prior to the shoot, we had a lot of rehearsals and the director helped us prepare.

"We also had a North Korean dialect tutor. So we learned the Pyongan dialect or the Hamgyong dialect and then the tutor would help us out with perfecting our accent."

While North Korean dialects may be more foreign to some, South Korean ones require effort to learn as well.

Co-stars Won-jong and Ji-hoon had to pick up the Kyonsang dialect for their performance as father-son duo Moscow and Denver respectively.

Won-jong, 56, said that they practiced really hard for a month to learn the dialect and accent, adding they would practice by acting out the scenes with full body movements instead of just sitting down at a table and reading the script.

But of greater note was the sizzling chemistry between the duo — the two are even calling each other "father" and "son" outside of the set.

"Won-jong really cared for me like I was his real son… he was a dad that I've never met, who just really pulled at my heartstrings," Ji-hoon, 41, said. "It was just natural that we felt this love towards each other."

Ji-hoon also recalled the first scene that they filmed together which involved an explosion. In it, Denver found himself wedged between two buildings while escaping from his enemies and is saved by Moscow, who blew a hole in the wall and emerged from the rubble to pull his son to safety.

"I could feel the explosion in my ears because it was so loud," Ji-hoon recounted. "It looked realistic… and dangerous."

ALSO READ: Money Heist Korea review: The same storyline, but with a twist