In a year when the global entertainment industry saw more scandals than it should, it looks like 2021 will end with regret and irony.

On Monday (Dec 27), Myanmar actor-model Paing Takhon — who has been detained in prison since April this year — was sentenced to three years in jail with hard labour for supporting pro-democracy protests in the country.

Today, TC Candler released a video on YouTube that named the 25-year-old the world's most handsome face of 2021.

The clip, which also featured 99 other male celebrities, captioned the text "Free this man" in Paing Takhon's segment.

Blackpink's Lisa, who's Thai, took home the honour of being named the most beautiful face of 2021. The top 10 list is dominated by Asian celebrities, with Filipino actress Ivana Alawi coming in at fourth, Momoland's Nancy at fifth, Twice's Tzuyu at seventh, Indonesian singer Lyodra Ginting at 8th and After School's Nana at 10th.

While Paing Takhon was already well-loved in his home country and Thailand, he shot to greater fame in January when photos of him with a shaved head and monk robes went viral on social media.

He wrote on his Instagram account then: "Spent my New Year 2021 by being a monk for 10 days and I felt so peaceful and knew myself more." 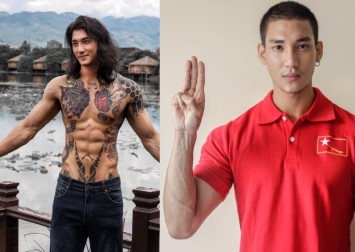 However, his showbiz career was upended when Myanmar military seized control of the country on Feb 1. He joined in the street protests, spoke out against the coup and rallied for international support through his social media accounts.

Soon after the coup, the junta published a list of around 120 celebrities wanted for arrest, which included Paing Takhon.

Two months later, he was arrested and detained by the military. His sister told Reuters then that the forces came with eight military trucks and about 50 soldiers at 4.30am at their parents' home in Yangon, where he had been staying for several days while unwell.

On Monday, his legal advisor Khin Maung Myint told AFP that his family is deeply saddened about his sentence and is considering whether to appeal.