Nadow Lin appears for first time in 3 months since stroke, girlfriend says 'he wasn't himself' after surgeries

After a hiatus of three months following his surgeries for cerebral haemorrhage, Taiwanese entertainer Nadow Lin has appeared for the first time.

He was in a video with his girlfriend Sherry Chen, who provided an update on the 41-year-old's condition.

According to Sherry, who is 12 years younger, Nadow likens the entire experience to "having a dream", mentioning that he often dreamed that he was going about his daily life while in the hospital.

The actor-host had a stroke in late January and was rushed to the hospital where he underwent his first surgery.

When news of Nadow's condition broke, a statement was posted on his Facebook page informing his followers that he had undergone surgery and was recovering in the hospital. It also mentioned that Nadow wanted to keep the matter low-key for fear of alarming the public.

He subsequently underwent a second surgery at his doctor's recommendation.

In the 10-minute video, Sherry described his recovery process while Nadow mostly nodded and responded briefly whenever she asked him a question.

She explained that Nadow could not recognise her the first month after his operation and that "he wasn't himself".

"He would bite my hand or throw tantrums. There were also funnier instances when I would be sleeping on the sofa next to his hospital bed and he'd wake me up to tell me he wants to give me a pay raise." 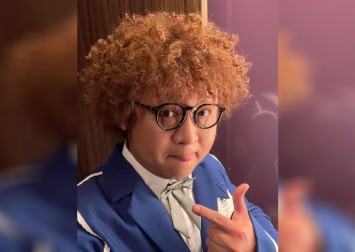 "I couldn't ignore him either as he would get angry. So when he asked me to get up in the wee hours of the morning, I would wake up and chat with him. For instance, I'd ask him how much of an increment he wants to give me, and he'd tell me NT$5,000 (S$233).

She added that Nadow had also asked her to join an "opening ceremony", where he'd look at the ceiling and talk about fireworks.

Describing how she felt about her boyfriend's condition back then, Sherry said: "I thought it was quite amusing, but also heartbreaking."

'I felt this wasn't my boyfriend anymore'

Sherry also shared details about what it was like seeing him after the operation.

She recalled: "When he went in to the operation, he still had his afro. But when he came out, his head was shaven and there were two tubes to drain out the blood [from his brain]... he also had a breathing tube in his nose, along with several different wires on his body."

"I was so shocked to the point where I felt that this wasn't my boyfriend anymore."

She also admitted that she climbed onto his bed and laid with him on Valentines' Day and shed a few tears after he fell asleep.

"These three months have been quite tough for both of us," she said, adding that she would share more updates about his recovery.

At the end of the video, Nadow thanked his supporters for their concern during this period. "If I had the ability, I hope to be able to thank everyone."