Naomi Osaka with her former coach Sascha Bajin before her match against Latvia's Anastasija Sevastova during the women's quarter-finals at the Brisbane International.

PARIS - Naomi Osaka has split from her coach Sascha Bajin just weeks after the 21-year-old added the Australian Open to her first Grand Slam at the US Open last year, the Japanese player announced Monday (Feb 11).

"Hey everyone, I will no longer be working together with Sascha. I thank him for his work and wish him all the best in the future," Osaka said.

The coach also took to Twitter to comment on the matter: "Thank you Naomi. I wish you nothing but the best as well. What a ride that was. Thank you for letting me be part of this."

The US based player has enjoyed a meteoric rise to the big time after leaping from 72 in the world to number one in the past 12 months. 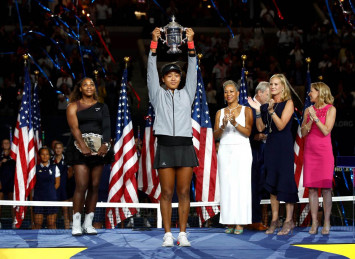 She became the first Asian to hold the top ranking after downing Czech Petra Kvitova in a tight final in Australia after beating Serena Williams in a memorable US Open final last year in which she won many fans for her grace under pressure.

By winning a second Grand Slam and becoming world number one, she firmly established herself as at the forefront of the next generation of women players.

And with that comes all-consuming attention.

"Winning back-to-back Grand Slam tournaments is a rare and special achievement, and I'm thrilled these results have propelled Naomi to the top of the women's game," said Chris Evert, the first ever WTA world No.1.

"Her exciting brand of tennis, coupled with the dignity she displays on and off court, is a winning combination that tennis fans really embrace."