Nuseir 'Nas' Yassin is better known as Nas Daily and a host on his viral social videos. Now, the 28-year-old can add an acting credit to his resume.

The Israeli-born and Singapore-based entrepreneur has made his acting debut in a local short film The Last Song, opposite Singaporean actor Andie Chen. The film talks about a war in Singapore, "set in the future 2030 when Singaporeans are thrust into defending our country against an unknown force", where Nas plays a Singapore soldier and Andie's best friend.

Andie also produces the film as part of Storeys, a film festival and ground-up initiative organised by media agency CreativesAtWork and supported by the Infocomm Media Development Authority (IMDA).

But Nas' screen debut is less fancy than it may sound. He told Marketing Interactive that his biggest challenge was filming his death scene where he was (gasp!) cut in half.

He explained separately to The Straits Times that he has some "gross scenes", adding: "The special effects, make-up and camera work were awesome and they did a fantastic job with me."

He also said that creating his own videos is "ten times easier" than making The Last Song.

Nas told The Straits Times: "It's not like shooting my videos, definitely. I shoot a video a day. For a short film like this, it took two days and a lot of money and a lot of make-up."

It’s a wrap for the first round of mentorship for #storeyssg! We’ll be unveiling the journeys of our shortlisted mentees soon, as they’ll be undergoing months of mentorship and working closely with our mentors @josiahng DDB Group Singapore, Diogo Martins @bloomr.sg and Nas @nasdaily . To reform taboo topics in Singapore like #death, into riveting short #storeys to drive a positive ripple of change with social-first content! #socialcontent #mentorship #filmmakers #storytelling

Nas was actually a mentor for the Storeys initiative and was roped in to act.

Despite experiencing 'culture shock' in this transition from social videos to film, Nas was willing to commit, according to Andie. Speaking to The Straits Times, 34-year-old Andie said: "I think (Nas) was quite shocked that we could spend three hours just doing one scene, but he was generous and game."

The "effects-heavy" and "costly" film is Andie's maiden attempt at production with his new production house Vagabond Media, and he admitted that the production cost exceeded the budget.

"We knew it would be difficult and expensive, but it was impossible to know how hard it would be. Sourcing for props like guns and uniforms - you need permits for some of that," Andie confessed.

Acknowledging the work that Andie put in for this film, Nas told Marketing Interactive: "It's incredible the amount of hard work, passion, and grit that goes into films like these. I hope people who watch the film appreciate how hard Chen and the crew worked on it."

Read Also
What Wuhan virus? It's business as usual for globetrotter Nas Daily 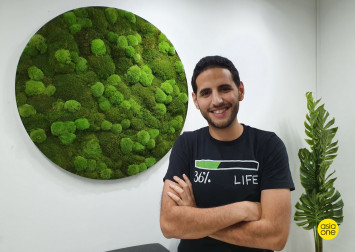 If you're hoping to see Nas in more productions, though, you might need to wait a while longer as the content creator doesn't seem to have been bitten by the acting bug.

His plans now are to focus on building Nas Studios — The Nas Company's video production arm — and Nas Academy, a four-week workshop for budding videographers.

Nas moved here last year after posting a slew of videos about Singapore back in 2018. In one such video, he even called it the "almost perfect country".

Since then, he has celebrated his company's first anniversary in Singapore, where he told AsiaOne more about his plans for the future and his thoughts on the coronavirus.

You can watch the short films in Storeys online. The Last Song is the last film in the series, and is slated to be released on April 11.