Natalia Dyer has been offered an apology by a cosmetic nurse who reeled off a list of plastic surgery procedures for the actress.

TikTok regular Miranda Wilson, 28, went viral across social media platforms on Sunday (July 24) after she posted a now-deleted clip in which she detailed the treatment she would give Stranger Things star Natalia, 27, as well as shared an edited image of the results.

In the wake of a furious backlash online, the nurse shared another video on Monday in which she called Natalia "stunning".

Natalia added she was just using the actress as an example to highlight the kinds of cosmetic procedures available.

Wilson said: "I just wanted to come on here and basically clear the air. I did not mean to offend anyone, including Natalia.

"I was simply just offering suggestions, not on what you have to do, just on what the possibilities are.

"As an advanced injector that's what we do. We look at faces, we assess and look at the possibilities. Not on what you need to do, or what you have to do, they're simply just options."

Read Also
From dealing with teenage life to working with a Hollywood icon: Tidbits from Stranger Things season 4 press conference 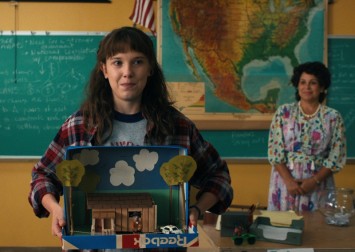 She admitted she has had Botox, lip and cheek filler, and a brow lift, captioning her clip: "Hoping to clear the air that I was not suggesting that Natalia needed any of that work it was just an example.

"Of course, Natalia is absolutely stunning the way she is… that's why she's so successful. Her photo was simply an example.

"I'm sorry if people took that as being mean or rude, that was not my intent at all."

"First of all, she killed it in Stranger Things. So if I were Natalia's injector, this is what I would do."

Wilson believed it would be necessary to start by "helping slim the face" before adding "a bit of chin filler just to help fill out her chin".