We've all got that one friend who is a straight-talker, suffers no fools, and takes no prisoners because they've seen it all. Someone who, for better or worse, often gives it to you straight because you need a reality check.

Well, in Netflix's latest hit reality show Bling Empire, 60-year-old heiress Anna Shay is exactly that kind of person and whom you'd want in your corner when things get bad. She's as generous with her wealth as she is with her barbs of wisdom and much-needed realness.

She is truly a refreshing character in a bedazzled world that often revolves around keeping up appearances and putting on facades.

Apart from being a household name among the rich and crazy rich in Los Angeles, though, not much is known about the eccentric socialite except that she's incredibly rich — to the point that she confesses the wife of the descendant of a Song dynasty emperor can't compete against "what I was born into" — and of Japanese, Russian, and American descent.

So who exactly is the internet's new BFF, Anna Shay? Well, here are some other facts that were not discussed on the show.

1. She is selling her Bling Empire "haunted" house for US$16 million

If you've ever wanted to try the Bling Empire experience for yourself and have millions of dollars to spare, then check out Anna's mansion that is up for grabs. The socialite bought the property nine years ago for US$9.4 million (S$12.5 million) and according to Variety, is now putting it up for sale with a hefty price tag of US$16 million.

Not only will she turn a profit on this (if a sale is successful), it seems that the property's value hasn't been hurt by her open admission that the house is "haunted". On the show, Anna said her pet monkey and fishes all died mysteriously, leading DJ Kim Lee to believe it could be haunted and offering to cleanse the place with the Bible and sage. 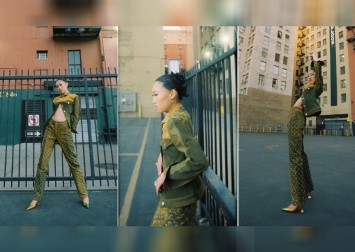 2. She sold off her father's company for US$1.2 billion

In the first episode, co-star Kane Lim said: "[Anna's] money comes from weapons. Her father sells bombs, guns, defence technology and it's worth, like, a few billion." Her American father, Edward Shay, is the billionaire founder of leading global defence contractor Pacific Architects and Engineers. She's kind of the real-life female version of Tony Stark, if you think about it.

Her mother (part-Japanese, part-Russian) is no slouch either as she's from aristocracy. So really, Anna was born crazy rich — as her mother puts it, she was born "into a crystal ball with a silver spoon".

The billion-dollar business may have contributed to their wealth, but Anna and her brother have since sold the company in 2006 for a whopping US$1.2 billion, according to media reports.

3. She didn't know she would join Bling Empire as part of its cast

Believe it or not, when Anna was approached to join the show, she didn't think she would be part of the cast. Speaking to OprahMag, Anna thought she was helping her friend (and the show's executive producer) Jeff Jenkins behind-the-scenes.

"The next thing I knew, I was sitting in front of the camera. I'm really quite shy, so it was hard. I never thought about doing this, especially at my age," Anna said, adding that she intended to keep the promise she made to Jeff that she would be part of the project.

ALSO READ: Kevin from Netflix's Bling Empire doesn't really have US$10 million — and other things to know about the hunky reality star

4. She was once robbed at gun point and the robbers forgot her wallet

If you got robbed, chances are, you would be incredibly grateful that the perpetrators forgot to take something. But Anna, bless her soul, decided to make sure they had their ill-gotten gains. She told Town & Culture that when she and her friends were robbed at a fast food drive-through, the robbers forgot about her wallet and she "jumped out of the car and hand-delivered it to them".

She shared: "They came back and I said, 'Here. Next time, three girls equals three wallets.'"

5. She doesn't get the influencer culture

By every definition, Anna is an influencer. She has social media presence with a following of 184,000 followers, and she is all about high fashion. She's the type of person designer labels would be clamouring to dress. However, Anna doesn't need sponsorship — which is typically a perk of being an influencer — nor does she understand it.

This is quite apparent on the show when she took a jab at her co-star and rival Christine Chiu. When Kevin Kreider offered to return the Dior items Anna purchased for him, he said that he wasn't sure if the brand had sponsored Anna. To which, Anna quipped: "No, I don't get sponsored. Call Christine for that."

She admitted to OprahMag that she has never heard of the term "sponsored by" and had to ask her French BFF Florent who explained what it meant. She said: "To this day, I don't understand the concept of this. How could somebody go up and say, 'Can I sponsor this?' It's so embarrassing. I just walk away, like, I don't know this person."