Shin Min-a (left) and Kim Seon-ho in a still from Hometown Cha-Cha-Cha.

Romance is in the sea breeze in Hometown Cha-Cha-Cha, the latest Korean drama streaming globally on Netflix.

This opposites-attract rom-com set in a quaint seaside town stars Shin Min-a and Kim Seon-ho and is sure to delight fans with its rustic charms.

Shin plays Yoon Hye-jin, a young dentist working in Seoul where she lives in a high-rise apartment. She enjoys living a material life but also has a moral streak that gets her into hot water with her boss at work, who she believes to be fleecing cash out of customers through unnecessary procedures.

Hye-jin gets the boot and following an ill-advised drinking session, she goes on a rant about her experience online.

On the job market but blacklisted by her former employer, Hye-jin has mounting bills to pay and on a whim, she visits Gongjin, a seaside town she visited with her parents as a child.

Life in Gongjin proceeds at a sleepy pace, except for the life of Hong Du-sik (Kim), Gongjin's everyman, who everyone affectionately calls "Mr Hong". Du-sik is everyone's favourite fixer-upper and he seems to perform all the odd jobs in town, and always with a smile.

Hye-jin doesn't warm up to Mr Hong on their first encounter on the beach after she loses her shoes and he lends her a pair of dirty bathroom sandals. She spends a frustrating day in the town, with highlights including a stalled car, bad coffee and no means to pay for it after the card readers and ATMs in the area go on the blink.

And yet, by day's end, she is also drawn to the peaceful lifestyle of the town, particularly as her unemployment status is burning a hole in her pocket as she tries to keep up with her city costs.

One thing leads to another, and Hye-jin decides to open a dental clinic in Gongjin. Before long her best friend Pyo Mi-seon (Gong Min-jung) joins her as her dental assistant and roommate. 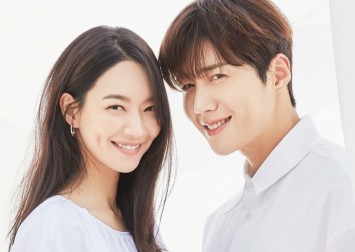 Hye-jin's city ways don't always endear her to the locals and a few gaffs on her part drive any potential customers away once the business opens its doors, but Mr Hong takes pity on the city girl and gives her a few tips to warm up the locals and get her clinic underway.

Many Korean dramas these days are drawn from popular webtoons, but Hometown Cha-Cha-Cha is actually a remake of a 2004 Korean film called Mr. Handy, though it also goes by the title Mr. Hong.

That film starred Uhm Jung-hwa and the late Kim Joo-hyuk and came out during the heyday of South Korea's cinematic romcoms, alongside My Sassy Girl, which also got a K-drama update a few years ago.

There's something a bit old-fashioned about Hometown Cha-Cha-Cha , which may be because it falls in line fairly closely with the 17-year-old film it is based on, but that's also precisely the point. Gongjin is steeped in an ageless quality and it invites Hye-jin – and by extension, all of us watching – to cast aside our modern worries.

The city-slicker-in-the-countryside is hardly a novel format, but as South Korea continues to become urbanised and abandon certain traditional values, these stories are becoming more necessary.

Racket Boys did the same thing earlier this year, and just like that show Hometown Cha-Cha-Cha also focuses on older characters and having respect for one's elders, though it's done here with a lighter touch and is more gracefully integrated into the story.

Traditional values are foregrounded but what's more important is escapism, plain and simple.

Hometown Cha-Cha-Cha is small-screen comfort food, an invitation to viewers to get lost in a simple tale of romance by the sea.

The breeze flutters through the leads' hairdos as they lock horns, and we wait for them to realise how they actually feel.

Korean romantic dramas have been a mixed bag this year, following the highs of last year, including Crash Landing on You.

One of the problems has been a lack of chemistry between lead pairings but thankfully there is no such problem here as Shin and Kim are a compelling pair from the very beginning.

It's enjoyable to watch them bicker and we want to see them come together.

Shin embodies the modern material girl with a hidden heart of gold to a tee, while Kim is charming as the affable everyman and they push each other's buttons in all the right ways.

However, this being a K-drama, cultural tensions won't be the only thing conspiring to keep the pair apart, as there will also likely be a rival love interest in the form of Ji Sung-hyun (Lee Sang-yi), who hasn't figured in the story much yet.

Besides the peaceable setting and the endearing leads, Hometown Cha-Cha-Cha has had a couple of other highlights in its early flourishes, including a cameo from Lee Jung-eun, the actress who shot to stardom as the housekeeper from Parasite .

Hometown Cha-Cha-Cha is streaming on Netflix.