Netizen accuses Alan Tam, 71, of hooking up with his girlfriend, 23

Right: A photo released by the netizen of the mystery man, which he claims to be Alan Tam. Left: Netizens found a photo that Alan Tam had posted of himself working out.

An anonymous netizen in China has accused Hong Kong icon Alan Tam, 71, of hooking up with his 23-year-old girlfriend, who also happens to be a fan.

According to reports, the man posted the allegations on Weibo on Nov 23, and the post was also accompanied by a photo of a man in a black T-shirt, taken from the back.

While nothing indicates that the identity of this mystery man is Alan, netizens made comparisons to a photo that Alan posted of himself working out in a similar black T-shirt.

The netizen first ranted about his girlfriend getting together with a Hong Kong singer who has a good reputation for his artistry and conduct.

In a second post, he divulged more details and revealed that his girlfriend chases after idols, and he accidentally found out that she had already got together with this singer. The netizen also claimed that his girlfriend lied to him about the nature of her trip to Shanghai as she had in fact, gone on a date with the singer.

It was only in the third post that the netizen tagged Alan and chided him for being a player despite having a wife and a mistress, with whom he has a son. He pointed out the huge age gap between the two — 48 years — and asked how Alan could still go through with it.

He said perhaps his girlfriend "wasn't thinking straight" but Alan, with his age, should be able to think clearly.

Read Also
1 man, 2 wives: Alan Tam says his polygamy made the women in his life suffer 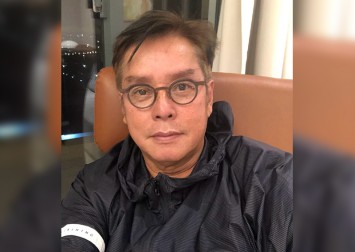 The netizen removed the tag from his post sometime after and told people not to message him privately because he is also a victim. He later removed his posts entirely.

In response to the claims, Alan's management agency said: "As a member of the Hong Kong Election Committee, he will not sit back and ignore behaviours that harm his personal image, and must take the appropriate legal actions to stop those who are intentionally using their own platform to harm himself and others."

After the statement was released, the netizen responded by releasing two more photos of the mystery man; however, none of those photos revealed the person's face or identity.

He threatened to release one photo for every statement that the agency makes.

Just last October, Alan went on a radio show and spoke about his polygamy, imploring others not to follow in his footsteps.

He apologised to his wife Sally Yeung and mistress Wendy Chu, and said: "It's not good to have two wives. I've made them suffer. I hope you all don't learn from me."