Nick Jonas taken to hospital after accident at work

Nick Jonas was taken to hospital after being injured at work.

The Sucker hitmaker was on the set of a new TV show on Saturday (May 15) night when "something happened" and he was left hurt, prompting an ambulance to be called to take him to the nearest medical facility.

Sources wouldn't disclose the nature of Nick's accident or injury but told TMZ that he returned home shortly afterwards and will still appear as planned on The Voice on Monday (May 17).

It is also unclear what project the 28-year-old star was working on when he was hurt.

Meanwhile, Nick - who is married to Priyanka Chopra - admitted he doesn't take the idea that he's a sex symbol seriously and would get "a little embarrassed" if he thought too much about it.

Asked how he feels about being considered a sex symbol, he replied: "Er, I think it's flattering, but attraction is such a nuanced thing. I don't take it too seriously. I just learn to laugh about it and think about the fact that my parents are probably reading some of the comments. 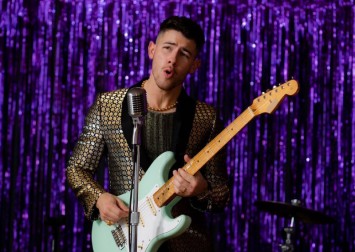 "It's not something I wear as a badge of honour. I tend to try to not think about it, because it would make me feel a little embarrassed."

And while the Jumanji: Welcome to the Jungle actor would love it if people had sex while his music was playing, he won't be doing the same.

Asked if he is conscious that people use his songs to soundtrack their sexual activities, he said: "I am and I think it's flattering. It's important to have a good playlist and I certainly have mine. I wouldn't include my own music on that playlist though.

"But I would be thrilled if someone used my music on theirs for that experience."