"It is so trippy and crazy... I dare you to ask any of us what genre this is. We have no idea," Nicole Kidman told reporters.

Kidman leads a cast that includes Melissa McCarthy, Bobby Cannavale and Michael Shannon in the tale of nine wealthy, stressed people who go on a retreat to a remote boutique resort.

The series is partly a satire on the wellness industry. Kidman plays a mysterious health guru who promises a life-changing experience using unconventional methods that go way beyond massages and yoga.

Filmed in rural Australia, the eight-episode series launches on Hulu on Wednesday (Aug 18). 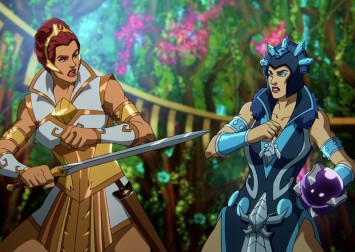 It is co-written and produced by David. E. Kelley, who with Kidman was also in the team behind the 2017 hit TV adaptation of Moriarty's murder mystery Big Little Lies.

McCarthy, who plays a romantic novelist suffering from a broken heart and a declining career, said the show brings up big philosophical questions, including "what will be changed when you're gone? Who will care? What have you left behind?"

"It brings up pretty big questions - and I was terrified of being attacked by bull ants," McCarthy said.