After years of resistance, Rui En has finally seen the light.

While other local — and older — celebrities have already moved on to TikTok, the 40-year-old local actress only set up her personal Instagram account at around noon today (Aug 5), and it looks like she's having way too much fun on the platform.

In the four hours since making her first post, she's dropped 14 Instagram Stories, with some of them showing her posing for the camera.

In her fourth Story, she said self-deprecatingly: "I obviously have no idea what I'm doing."

She then asked her supporters what they want to see in her Stories, and also shared a welcome video from local celebs Shaun Chen and Chantalle Ng.

In the short clip, Shaun, 42, teased her and laughingly said: "Wah this Rui En, you've finally arrived on social media and Instagram. Oh my god, this is wonderful! How old are you?"

Rui En added the caption: "Why this Shaun Chen so rude?! He older than me leh."

(By the way, Shaun is a pro at social media hor. It was previously reported that he engaged a content agency to plan and draft his social media posts.)

And two hours after her first post, Rui En posted a photo of a cat and added the caption: "Think I'm getting carried away by posting too many Stories. Someone may need to come physically remove my phone from me."

Her last Story was a photo of her looking unsmilingly at the camera. She captioned it: "Extra pic but this one very black face. Am gonna throw my phone into the toilet bowl now."

It's ok Rui En, we've looked at your 'black face' for years, no complaints.

But jibes aside, her first post was on a sombre note. She started off by saying: "Starting from Oct 2020, within a span of six months, I lost my cat and nearly lost my Dad to a heart attack, on top of all the Covid chaos. I haven't lost my mind yet, though I came pretty near to it." 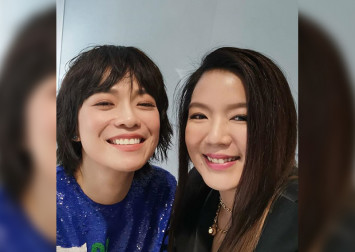 She added she used to be "vehemently against the idea" of being on social media, and would never start an account because she wanted to preserve her privacy. But she changed her mind.

"Then all the grief, loss and Covid happened, and I started thinking of mortality. I realised that if I looked back at the end of my life, a major regret would be having a platform but not using it to help others."

She didn't elaborate on how she intends to use her platform, which already has close to 17,000 followers within five hours.

She also dropped the bomb that she has left her talent management agency Artiste Networks — which she's been with since her showbiz debut at around 2001 — on amicable terms.

She ended the post with a quote from 16th century English explorer Sir Francis Drake about venturing on "wilder seas", which is also her Instagram handle.