'Why are you leading kids astray?': Mark Lee and Jaspers Lai on drag queens and their Golden Horse-nominated Number 1 on E-Junkies

With his mentor Jack Neo famous for roles like Liang Ximei and Liang Popo (where the actor-director appear in drag), one would think Mark Lee wouldn't face any resistance for acting as a drag queen in his latest film, Number 1.

However, scriptwriter and co-star Jaspers Lai revealed that when the news first broke about the inclusion of drag queens in the film, netizens were livid.

Jaspers, 33, told AsiaOne on E-Junkies: "The keyboard warriors on the internet started commenting. They said, 'Why must a man act like a woman? Why are you leading kids astray?' [We were called] 'scums of society' and other similar things.

"I was crestfallen after reading all the comments. I felt it was bad that the film was facing backlash even before we started filming."

Just to clear the air though, the film isn't just about Mark Lee playing a drag queen. In fact, it's a heartwarming dramedy that sees Mark's character Chow Chee Beng taking up a job as a manager at a drag club after getting retrenched. Chee Beng then becomes a performer and realises he has a knack for it.

And yes, Chee Beng has wife and kids — before any of you asks.

However, Jaspers said that ever since Mark was nominated for Best Leading Actor at the prestigious Golden Horse Awards, he's become a sort of "protection charm" and the comments have been pretty okay.

Mark, 52, added: "If you have constructive criticisms after watching the film, then that's fine. What I don't like the most are people who haven't watched it and have preconceived notions about what the film is."

With the depiction of drag queens, which remains a controversial topic, is this NC16 film suitable for the family then?

According to Jaspers, it is because what the film explores is love, which is not just limited to romantic love between couples. He explained: "There are many different types of love [in the film], like those between husband and wife, love for society, and love for your family." 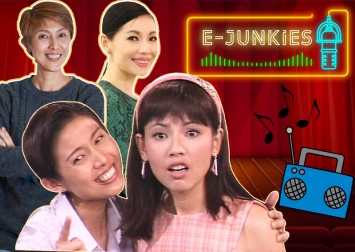 To stay true to their roles, Jaspers specifically wrote in the script that they had to wear heels and it was about five to six inches high. He said: "Our feet all went numb after dancing in heels, but the only person who didn't complain was Mark. He didn't complain at all, while the rest of us whined about the pain and asked for chairs."

Mark explained: "Sometimes, it's really about setting an example for the younger ones. I know it's tough, who doesn't find it tough? But there's no choice. Let's not trouble other people."

And when he first got the news about his nomination, all Mark said to his manager was "Oh". But as the congratulatory messages starting coming in, the news sank in.

"Of course there are people online who say that I got nominated because Chinese and Hong Kong films didn't participate. This is a fact. But I'm indifferent towards it. Even if we get nominated because no one else took part, we still get noticed," Mark said.

Number 1 is now showing in cinemas.