Nurses in Chinese hospital take turns to lie on singer JJ Lin's bed, as drip bag supposedly used by him offered for sale

There was news earlier about chopsticks and wet wipes supposedly used by celebrities that were later put up for sale. Now, even a drip bag - said to be used by Singapore singer JJ Lin - has been offered for sale online.

Lin, 38, who was in China's Zhenjiang city in Jiangsu province on Saturday (Oct 26) for the latest leg of his Sanctuary 2.0 World Tour, was reportedly unwell due to the local weather. After his concert, he went to the Zhenjiang First People's Hospital, where he was put on a drip, the Chinese media reported.

A netizen, believed to be a medical staff member of the hospital, then offered a drip bag and syringe supposedly used by Lin for sale online. The netizen posted a photo showing the Chinese character "Lin" and room number on the items. Interested parties were urged to message him or her on WeChat.

The action drew condemnation from netizens, with several calling for disciplinary action to be against the staff. The netizen said in a later post that the drip bag and syringe have been "taken by a fan". 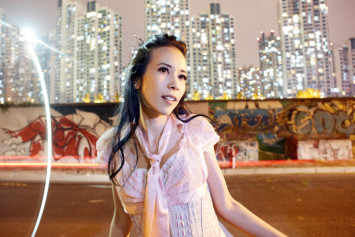 This is not the first. Earlier this month, a pair of chopsticks used by Canadian-Chinese singer Kris Wu and wet wipes used by actress Angelababy were also offered for sale online.

Lin's hospital stay also seemed to have brought joy to staff at the hospital. In a video circulating on the Internet, some nurses and hospital staff were shown taking turns to lie and roll on a bed said to have been used by Lin during his stay in the hospital. They were also seen in the video filming or taking photos of the incident.

On Monday, the hospital posted on its Weibo account that the staff involved in the incident have been suspended and would be dealt with soon. It added that investigations showed that the medical waste has been discarded according to regulations.

Meanwhile, Lin's agency, JFJ Productions, said in a statement that it deeply regretted the leaking of personal information by individual staff who ignored their professional ethics and added that it is confident that the hospital will deal with the incident appropriately. It also called for a boycott of all actions which infringe on an artist's privacy.