The Migos rapper appeared on stage during Cardi's headlining set at Rolling Loud festival in Los Angeles along with a huge 'Take Me Back Cardi' sign, made out of white and red roses.

Cardi looked unimpressed when her estranged husband took to the stage, to a chorus of cheers and boos from the audience, and begged her to forgive him and take him back.

He said: "I just wanna tell you I'm sorry. In person, in front of the world. Whatever I gotta do to show you I love you."

Offset tried to take her hand but Cardi did not allow it and ushered him off the stage.

Rolling Loud festival appeared to have helped Offset to set up his surprise appearance as they tweeted: "Whatever happens tonight on the @audiomack stage, it's going viral. Make sure you're there tonight for Bardi." 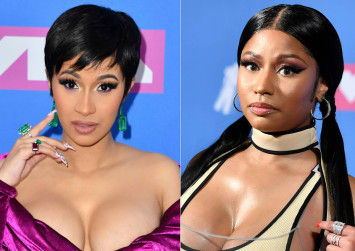 However, the tweet was deleted from the festival's official account after backlash from fans over the stunt.

Offset's stage apology came after he took to Instagram to admit he had been "selfish and had messed up".

He said in a video shared to Instagram: "I only got one birthday wish and that's to get my wife back Cardi.

The 27-year-old star then went on to appeal to reunite their family for the sake of their four-month-old daughter Kulture.

He said: "Kulture, I want to spend Christmas with you."

He said: "I want to be able to spend the rest of my life with you. I'm sorry.

"I am sorry for what I have done to you. I didn't f**k that girl, but I was entertaining her, you know what I'm saying? I apologise, and I love you, and I hope you forgive me. My birthday wish is just to have you back."