Cardi B (right) and Offset.

Offset and Cardi B are "taking things slowly" since their reconciliation.

The Migos rapper and the 'Bodak Yellow' hitmaker - who have seven-month-old daughter Kulture Kiari together - split last year before sparking reconciliation rumours in December when they were spotted together in Puerto Rico, and later confirming speculation this month when they attended the 2019 Grammy Awards together.

But despite their romance being back on track, Offset, 27, insists he and Cardi are making sure they don't rush into things too quickly.

He said: "It's been good. We're being more open to each other, raising our baby and taking things slowly." 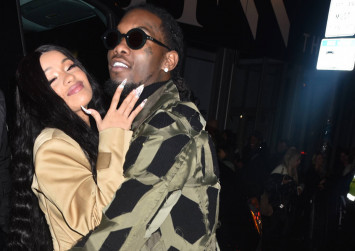 The 'Bad and Boujee' hitmaker - who has three other children, Kody, Kalea, and Jordan from previous relationships - is currently working on a solo album, and says the material he wrote for the record made him "cry", because it deals with his relationship with his brood.

He added: "I cried to myself while I was doing this album 'cause I was talking about my story and my kids. When I did a song, I started getting memories of my grandma, my struggles, my partner that was killed, the thoughts I had while I was incarcerated, and my kids' faces were there in my head. I love my kids, this is who I do it for."

And Offset insists he's a "vulnerable" artist, and doesn't think he's "too tough".

Speaking to Esquire magazine, he said: "Hell yeah, I'm vulnerable. I ain't too tough. F**k all that stream shit because I don't do music for money. It's my heart. This is what I believe in. It's my creativity and I do it for the people."