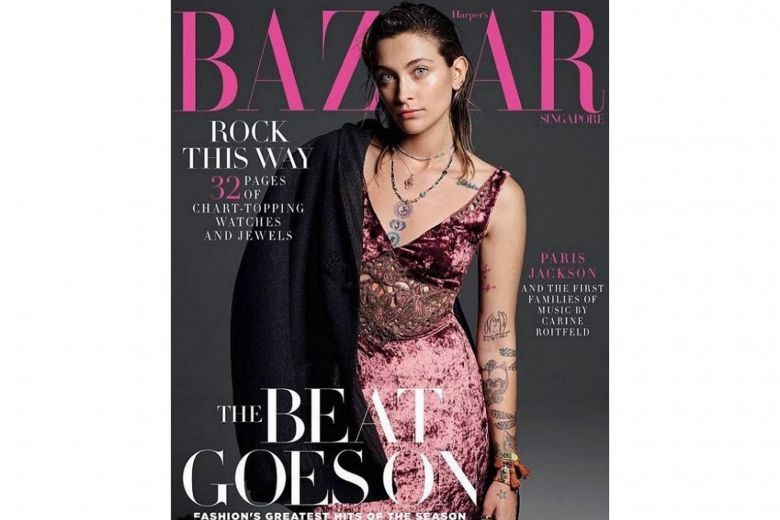 Paris Jackson, the 20-year-old daughter of the late pop star Michael Jackson, has apologised for appearing on the cover of Harper's Bazaar Singapore.

The actress drew flak abroad for fronting the title in Singapore, where existing laws regarding the lesbian, gay, bisexual, transgender and queer (LGBTQ) community remain conservative.

Jackson, who confirmed to fans last month that she was bisexual, had taken to Instagram on Monday (Aug 20) to promote the September issue of the magazine.

The photo, which has since been taken down, reportedly had the caption: "Honoured and grateful".

Her Instagram post sparked an op-ed piece on LGBTQ news site Gay Star News, which labelled her as hypocritical.

The piece said that Jackson failed to mention the fact Singapore criminalises sex between gay men.

"As a member of the community, her decision is all the more disappointing," wrote Entertainment Editor Jamie Tabberer.

The Gay Star News shared a link to the story with Jackson on Twitter and said: "C'mon Paris Jackson."

Replying to the tweet, Jackson said that while she was grateful for the opportunity, she was sorry that she was not aware about the gay rights in the country. She later deleted her Instagram photo.

"I don't want to be hypocritical or hurt anyone, and my support for my fellow LGBTQ+ community comes first before my love for fashion," she tweeted.

However, she took a more defensive tone in subsequent tweets, saying that her cover appearance should not be derided but celebrated as a step forward.

Calling the Gay Star News story "ridiculously mean", she added that the magazine shoot was not intended just for the Singapore edition. The cover photo was meant to appear in several other countries too, she said.

On Twitter, Jackson's fans were puzzled over the op-ed piece, with many eager to throw their support behind her.

One user said: "I'm part of the LGBTQ community and I don't understand the problem??"

Said another user: "Representation matters. Imagine those closeted in Singapore seeing a strong LGBTQ+ person on a magazine cover. This is hugely important for them."