Cast member Michael B. Jordon poses during Photocall for the film "Fahrenheit 451" at the 71st Cannes Film Festival in Cannes, France, on May 12, 2018.

Michael B. Jordan is signing up to OnlyFans for a charitable cause.

The 33-year-old actor was recently named People's Sexiest Man Alive, and has said he now plans to join the subscription-based adult content site where fans can pay to see snaps of his body, but insisted he wants all proceeds from his account to go toward funding schools.

Speaking during an appearance on Jimmy Kimmel Live!, he said: "I'm actually going to start one, but like all the proceeds I want to go towards a barber school because during the quarantine, you know, there's been so many businesses and schools that shut down."

Michael joked his OnlyFans account would be dedicated to his new moustache, which he grew during quarantine, and which he has named Murphy.

When asked to confirm if an OnlyFans account dedicated to Murphy would be up in the near future, he said: "Yeah, it's a thing."

And he then added of his facial hair: "I never had time to actually sit in one place and grow my facial hair where I didn't have to get it groomed, or manicured, or anything like that. So, during quarantine, I just wanted to see how much hair I could actually grow."

The Black Panther star was named People's Sexiest Man Alive last week, and recently said it's a "good club" to be joining. 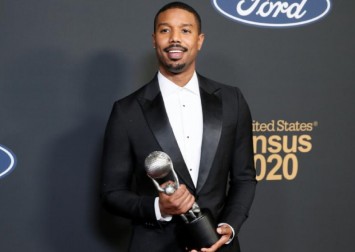 He said: "It's a cool feeling. You know, everybody always made that joke, like, 'Mike, this is the one thing you're probably not going to get.' But it's a good club to be a part of."

Michael also revealed the women in his family "are definitely proud" of his latest moment of recognition, and noted his late grandmother used to collect the Sexiest Man Alive edition of the mag.

He added: "When my grandmother was alive, it was something that she collected, and then my mom naturally reads it a lot and my aunts as well.

"This is one that they're definitely going to have a special place for."