The Bones Bones Bones star - who has been outspoken about his experience with having Borderline Personality Disorder - took care of himself after he was targeted by the 45-year-old rapper, the ex-husband of his former girlfriend Kim Kardashian, was was very vocal about how much he did not like her relationship with the former SNL star on various public platforms.

The 28-year-old comic - who earlier this week had his break up with the 41-year-old reality television personality - has since opted to receive treatment after the ordeal, according to reporting.

An insider told Entertainment Tonight: "Pete is bummed things didn't work out with Kim, but he is focused on the future in terms of his career and personal life."

The latest attack was a Instagram post by the Jesus Walks rapper, who shared a mockup of a New York Times front page that read: Skete Davidson is Dead at Age 28.

An insider later revealed that Kim - who has daughter North, nine, son Saint, six, daughter Chicago, four, and son Psalm, three, with Ye - was "furious" about the post.

They added: "It's another one of his outbursts and it's not a joke to her. She doesn't take his attacks lightly and demanded he take it down."

Kanye first came for Pete in the lyrics of his song Eazy, rapping: "God saved me from the crash so I can beat Pete Davidson's a**" in January.

In February, the Gold Digga rapper began harassing the King of Staten Island star on Instagram, writing on Super Bowl Sunday: "HOLD YOUR SPOUSE CLOSE MAKE SURE THEY KNOW HOW MUCH YOU LOVE AND APPRECIATE THEM BECAUSE THERES A SKETE LURKING IN EVERY DIRTY ASS ALLEY WAITING TO HELP DESTROY YOUR FAMILY AND WALK AROUND IN CALVIN KLEINS AROUND YOUR CHILDREN. (sic)"

He also wrote: "IF YOU SEE SKETE IN REAL LIFE SCREAM AT YHE LOOSER AT

THE TOP OF YOUR LUNGS AND SAY KIMYE FOREVER (sic)".

Kanye later shared screenshots of a text exchange from his ex - who filed for divorce in January 2021 - pleading him with him to stop.

Kim texted: "U are creating a dangerous and scary environment, and someone will hurt Pete and this will all be your fault." 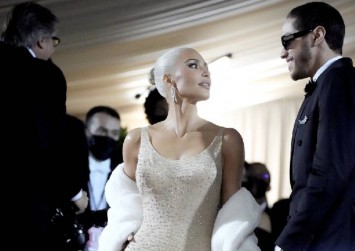 In the caption, Kanye wrote: "UPON MY WIFE'S REQUEST PLEASE NOBODY DO ANYTHING PHYSICAL TO SKETE IM GOING TO HANDLE THE SITUATION MYSELF."

Pete has detailed the impact his love life has had on his mental health before, such as when he split from Ariana Grande in 2018.

The Meet Cute star also explained his Borderline Personality Disorder diagnosis - which leads people to have poor control over their emotions - while appearing on an episode of WTF with Marc Maron in 2017.

Pete told host Marc Maron: "I've been a pothead forever. Around October [or] September last year, I started having these mental breakdowns where I would, like, freak out and then not remember what happened after. Blind rage.

"I never really did any drugs, so I was, like, 'I'm gonna try to go to rehab. Maybe that'll be helpful.' So I go and get off weed. They told me, they're like, 'You might be bipolar.' … One of my psychiatrists [diagnosed me]."