It looks like Lyn May's pregnancy could be real after all.

After shocking netizens with her pregnancy announcement in early August, the 68-year-old Mexican actress provided a baby update on her Instagram last Wednesday (Aug 25).

The post shows a short clip of a baby sonogram, accompanied with the hashtags #2022, #enero (January) and #LosQuiero ('I love') in the caption, an indication of the baby's expected arrival.

Lyn May claimed the father of her baby is 30-year-old recording artist Markos D1, and he has also come out to address the situation regarding his purported child.

Shortly after the pregnancy announcement, he told Newsweek in an interview that he, too, only found out about the pregnancy through social media.

Then on the same day that Lyn May posted the sonogram, he told a Mexican entertainment news show De primera mano — which was subsequently reported by El Heraldo de Mexico — that although he believes Lyn May, he intends to request for a paternity test to confirm that he is indeed the father of her child.

He confirmed that although she might be carrying his baby, they are not romantically linked. "We do not have a relationship, but sometimes things happen... we have a close friendship and we love each other very much," he said.

In the previous interview with Newsweek, he had also reiterated that marriage was out of the question.

"She's been married seven times already," he said. "I don't think she would want to get married again. And there have been so many stories about when she dug up her [dead] husband from the grave. She has a lot of history!"

Read Also
Mexican actress Lyn May, 68, claims to be pregnant after 1-night stand with musician, 30 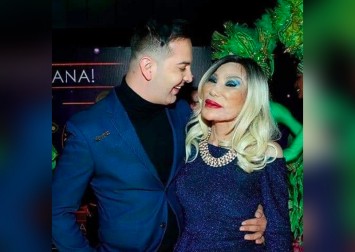 Baby to be named Belinda or Gustavo Adolfo

On a more lighthearted note, Markos revealed in the latest interview that the two have already decided on baby names.

He shared that the baby would be called Belinda if she was a girl, after a Mexican singer-songwriter.

If the baby is a boy, he'd be named after television show host Gustavo Adolfo, who has apparently requested to be the godfather of the baby and the organiser of the baby shower.

It also looks like a baby isn't the only thing that Lyn May can look forward to.

Should she successfully give birth, she will allegedly set a new Guinness World Record as the oldest woman to have given birth, beating Maria del Carmen Bousada de Lara, who delivered twin boys at the age of 66 in 2006.