She's crawled out of her well and television screen and into YouTube. Sadako Yamamura has returned and this time she's an aspiring vlogger.

That's right, the ghost that scared the living daylights out of all of us in the 1998 horror film The Ring is back and she's more tech-savvy than before.

She started her channel ​​— titled Sadako no Ido Kurashi or Sadako's Well Life — just four days ago and has already amassed over 42,700 followers. Like many vloggers, she uploads videos on her daily life because she wants to show the private side of herself as an actress.

In her first video, she gives us a tour of her room; it's a simply decorated space with an old-school television and a well where she apparently sleeps in.

In her next video, she answers 100 questions from fans eager to know her better. From there, we find out that her favourite manga is Jujutsu Kaisen and that she takes about an hour to get ready in the morning.

Sadako also takes ages to brush her hair; I guess the effort pays off as her long tresses are one of her most distinctive features.

Despite being a ghost herself, Sadako confesses she tries her best to avoid entering haunted houses as she finds them scary and is afraid of ghosts. Relatable moment. 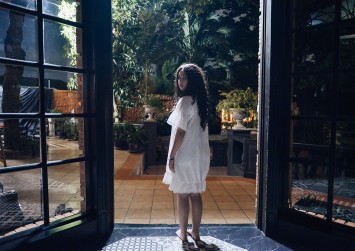 It's safe to say that although Sadako struck shivers down our spines years ago, this new channel is slowly obliterating our fears of her.

She first appeared in 1991 in a horror mystery novel titled Ring written by Koji Suzuki. The novel gained popularity and seven years after the first novel, the first film The Ring was released to wide success.

Almost all the films that Sadako appears in involve a cursed videotape — if someone watches it, they will be killed seven days later by Sadako who crawls out of a TV screen. Her last appearance was in 2017 in Rings, the third American adaptation of the novel.

Sadako has been posting every day so far and while her first two videos are in Japanese with no English captions, the versatile one must have heard the requests from her non-Japanese fans and so her latest video on March 9 comes with English captions. Hoorah!

In her latest clip, she takes a taxi and vlogs herself using a selfie stick. The cabbie is visibly confused but then again, who wouldn't? After a long ride, she arrives at her location and tries out the computer game Dead By Daylight, where she is one of the latest hunters in the game.

Sadako's YouTube following is growing by the day but here's an irony: victims who watch the cursed video tape of Sadako die in seven days... We aren't the only ones who wonder.