Priyanka Chopra kicked off her pre-wedding celebrations in style with a star-studded bridal shower.

The 'Baywatch' actress is set to tie the knot with fiance Nick Jonas in the coming months and her closest friends Mubina Rattonsey and Anjula Acharia threw a special party for the 36-year-old actress - who got engaged to the former Jonas Brothers star in July - on Sunday (Oct 28).

The likes of Hollywood stars Kelly Ripa and Lupita Nyong'o, Nick's brother Kevin Jonas, his wife Danielle and their daughter Alena were in attendance at the intimate bash held at Tiffany's Blue Box Cafe in New York.

The 'Quantico' star's stylist Mimi Cuttrell shared a picture of her client in a stunning ivory silk gown on Instagram, captioning the post: "@priyankachopra #styledbymimicuttrell (sic)"

The bridal shower comes after it was reported the pair are planning to marry in India before the end of the year.

A source said recently: "The wedding is happening in India in December."

It was previously revealed the couple plan to "blend traditions" from their respective cultures on their big day.

An insider said in September: "They really want to blend wedding traditions from both of their cultures that are important to them.

"Priyanka is having a really good time planning the wedding because it's a mix of Indian and American styles and customs, which she knows so much about."

Priyanka is excited about starting a family with Nick as soon as they are married. 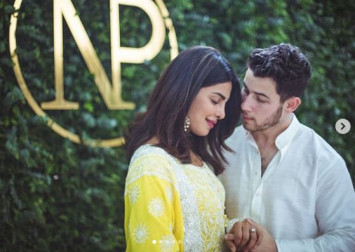 An insider said "They have amazing chemistry and can't wait to have kids. They are going to wait till after the wedding to start trying. But it's definitely on the agenda."

And Priyanka recently admitted she thinks the couple - who had a traditional Roka ceremony in Mumbai in August - need to "catch up" with her friends when it comes to having children.

She said: "I just have a few of my friends who are having babies right now and I'm like, 'God, I need to catch up!'

The 'Baywatch' actress says their pledge to get married has brought them even closer together, saying they now feel more like ''family''.