The 44-year-old hunk began his acting career here after taking part in Star Search 1999; he met his wife, actress Joanne Peh, at Mediacorp, and their two children were also born here.

But quite unfortunately, a seemingly innocuous incident in Singapore has affected his career.

Yuwu recently said he has never dared to act in a horror series or film in his 22-year showbiz career — until his latest drama series, the supernatural-themed iQiyi Southeast Asia original The Ferryman: Legends of Nanyang.

"I had opportunities previously [to act in such dramas], but I was hesitant to accept such projects because I had some experiences before. My imagination [of the supernatural] would affect me and I was worried I would have such obstacles," he said at the press event to promote the new drama.

"But I wanted to try something new. This new drama has a lot of different stories, each touching on different human qualities, and it would be an emotional project. As an actor, I want to portray different emotions. This was what attracted me [to the series]."

Plus the fact that it was a big-budget production tapping on talents from Singapore, Malaysia, and Taiwan.

In The Ferryman: Legends of Nanyang, Lawrence Wong plays Xia Dongqing, who has yin-yang eyes and can see spirits, while Yuwu plays Zhao Li, a grim reaper. Together with Xiao Ya (Taiwanese rookie Kate Kinney), they communicate with the distressed, wandering souls in the mortal world and help them with their unfinished business.

Yuwu later explained to AsiaOne that his fear of the spooky — even though he has never seen an apparition before — all began when he moved to Singapore after winning Star Search.

He was lonely and missed home, so one night, he went out for supper with his friends, who shared their ghost stories with him.

"When I went home afterwards, my imagination went wild and I got very scared, trembling even, for a few nights. I had to run to Jeff Wang's room and sleep with him because I was that scared," he recalled.

Read Also
Tay Ping Hui: Lawrence Wong spat on me; it was interesting 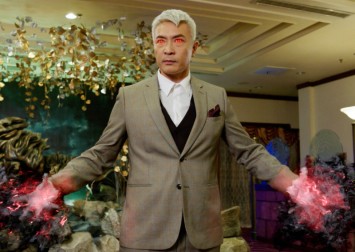 Taiwanese actor Jeff, who was the overall champion of the same season of Star Search as Yuwu, was his flatmate at that time.

Yuwu added, he didn't want to deal with the fallout from an over-active imagination, so he had never accepted roles in dramas dealing with the paranormal.

We asked, now that he's broken through the initial hesitation and tried the genre, would there be a second time?

"I'll have to see what the role is. Zhao Li isn't scared of the supernatural so that definitely helped me. But if the role is afraid, I would be affected," he replied.

Interested to watch Yuwu's debut in a supernatural show? The Ferryman: Legends of Nanyang is now available on iQiyi.